The ECB meeting on Wednesday turned out to be idealess. The head of the regulator, Mario Draghi, announced the later announcement of the details of the credit incentive programs. He also pointed to the economic risks of the eurozone, but identified them as decreasing. That is, he reiterated the theses of the previous speech. The euro's first reaction to Draghi's speech was to fall by 50 points. The stop occurred on the MACD line of a four-hour scale. Further, the price completely won back this decline. The upper limiter is the daily scale balance line (red indicator). Later on, the FOMC Fed minutes was published, which was neutral and did not have an impact on the markets. 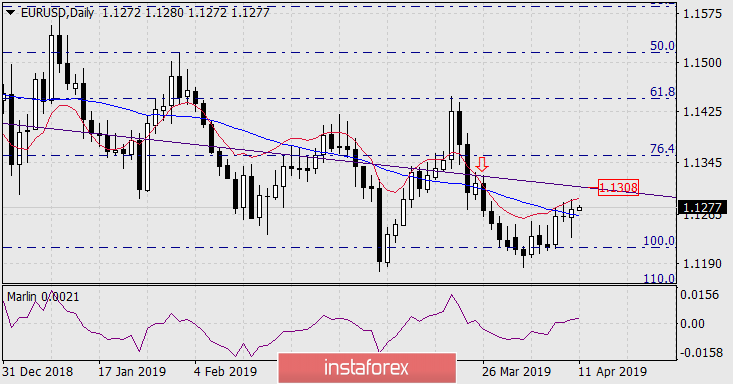 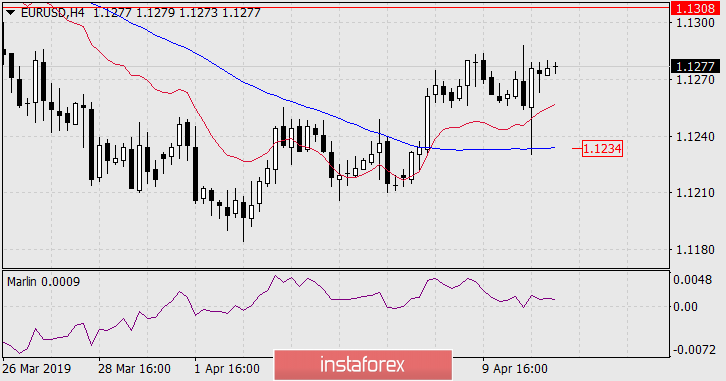 At the moment, the situation is technically increasing. On the four-hour chart, the price is above all indicator lines, the marlin oscillator is in the zone of positive numbers, on the daily chart the price is above the MACD line and the marlin oscillator is also in a growing position. If the market remains optimistic, the euro could rise to the resistance of the internal line of the daily chart price channel to 1.1308. But the observed price output over the MACD line of the daily scale may be fluctuating, as it was on March 25 and 26 (marked on the chart with an arrow), so the price could go below the MACD line without prior growth. Global trend - to strengthen the dollar.

It is possible to talk about a mid-term decline in the euro after consolidating the price below the MACD line of the four-hour chart (1.1234), which is precisely what the price failed to do yesterday. We are waiting for this signal and the euro to further decline to 1.1155.

The material has been provided by InstaForex Company - www.instaforex.com
2019 Forecast for EUR/USD for April 11