On Thursday, the dollar index strengthened by 0.27% following the fall in prices on commodity markets, primarily instruments, which are most strongly correlated with the dollar; gold -1.22%, copper -0.82%, oil -1.08%. The euro fell by 20 points, less than other counterdollar currencies. The euro's stability was shown in the Asian session - the European currency returned to the highs of the previous two days. On the technical side, the reversal was due to the support of the balance line on H4 and the marlin oscillator boundary separating the zones of growth and decline on the daily scale chart, which the signal line could not break down. Apparently, the price goes to the line of the price channel on the daily 1.1308, but it is hampered by the balance line. 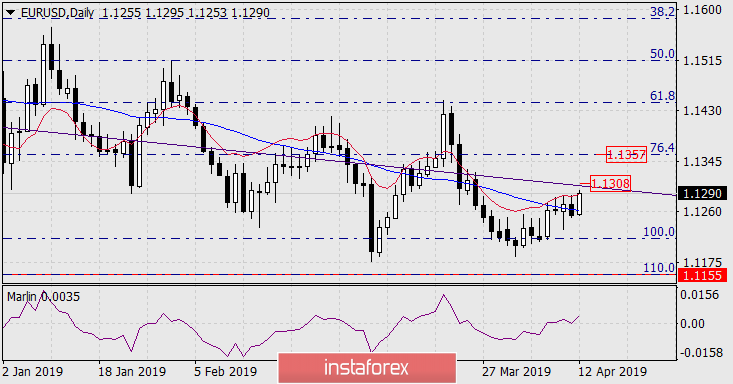 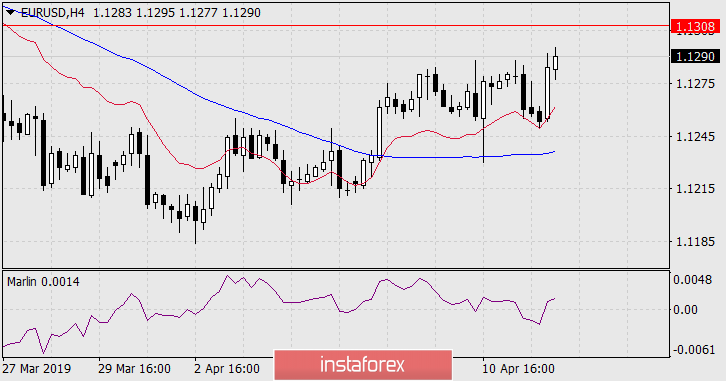 Meanwhile, the fall in commodity markets continues, other counterdollar currencies continue to lose ground against the dollar. A more decisive reversal of the euro is likely after a slight increase to 1.1308. A decline target of 1.1155.

The market potential may be stronger, that is, the resistance of the embedded line of the price channel can be overcome. This potential is indicated by the marlin oscillator on the daily chart, so stubbornly unwilling to move down. In this case, the euro's growth can continue to the Fibonacci line of 76.4% at a price of 1.1357.

The material has been provided by InstaForex Company - www.instaforex.com
2019 Forecast for EUR/USD on April 12