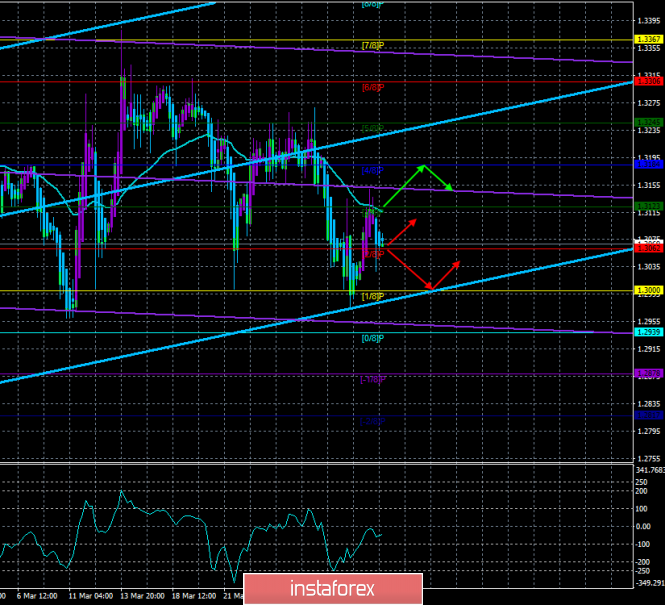 The GBP/USD currency pair adjusted to the moving average and failed to overcome it, therefore, it resumed its downward movement after the rebound. It would be rather strange if the pound sterling again began to grow, as there were no really important and positive messages from the UK. The UK manufacturing business index for March was published yesterday in the UK, and it was unexpectedly much higher than forecast (55.1 vs. 51.0). However, this index is unlikely to level the entire negative effect of Brexit. Meanwhile, the British Parliament held four more votes on possible options for the development of the event on Brexit. This time there was not even a loud announcement of this event. And quite rightly, as the Parliament did not try to surprise the public and rejected all four alternative options, including a new referendum, as well as the option of extending EU membership in the free economic zone, the option with the permanent Customs Union after Brexit and the option of another extension deadlines. The most interesting thing is that the Parliament has no choice but to continue to vote for all the options in a row, since it is necessary to choose and adopt at least one option. We can only watch all this chaos in the UK, which a few months ago it was even difficult to imagine. The pound, in our opinion, will continue to remain under pressure.

The pair GBP/USD resumed its downward movement. Thus, short positions with targets at 1.3062 and 1.3000 before the color with Heikin Ashi indicator 1-2 bars in purple color are again relevant.

Long positions will become relevant only after overcoming the moving with the first goal of 1.3184. From a fundamental point of view, there are few grounds for such an option.

The material has been provided by InstaForex Company - www.instaforex.com
GBP / USD. April 2. The trading system. "Regression Channels". The British Parliament rejected four of the Brexit option