GBP/USD. 5th of April. Trading system "Regression Channels". The British are tired of the Brexit theme 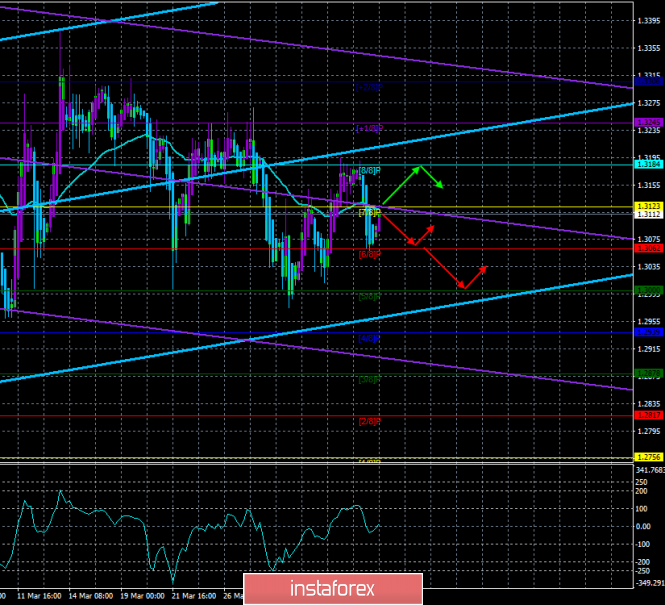 The GBP/USD currency pair continues to be thrown from side to side, as traders find it difficult to understand what awaits the UK in the future, what will be the result of the three-year Brexit procedure. According to the latest opinion polls, it becomes clear that most of the UK population is already tired of the Brexit topic. If some time ago, the words "unclear" and "uncertain" prevailed in the moods of the population, now most of the respondents describe the current situation as "chaos". Moreover, the majority of respondents believe that discussions on the country's withdrawal from the EU already have a negative impact on their mental health. Meanwhile, the UK is preparing for mass riots, which are possible against the backdrop of all that is happening in the country's politics. The European Union continues to offer options for a prolonged postponement of Brexit, but London is not satisfied with this option. Like many other options on the "divorce" with the European Union, which was rejected by the Parliament. We still believe that the pound sterling is prone to fall, just as long as some invisible forces keep it from conquering new lows. But these forces will not be able to restrain the pound forever. It seems that at one point, the pair will simply collapse and update the lows on January 3.

The pair GBP/USD once again changed the direction of movement and fixed below the MA. At the same time, it was not possible to overcome the level of 1.3062, and now the pair can at least begin a correction, and, as a maximum once again gain a foothold above the moving average. Not a good time to bid.

Buy-positions can be considered after fixing the pair above the moving average, but only with a "short" target – 1.3184.

The higher linear regression channel is the blue lines of the unidirectional movement.

The material has been provided by InstaForex Company - www.instaforex.com
GBP/USD. 5th of April. Trading system "Regression Channels". The British are tired of the Brexit theme