GBP/USD. April 1. The trading system. "Regression Channels". The patience of the EU in the matter of Brexit runs out 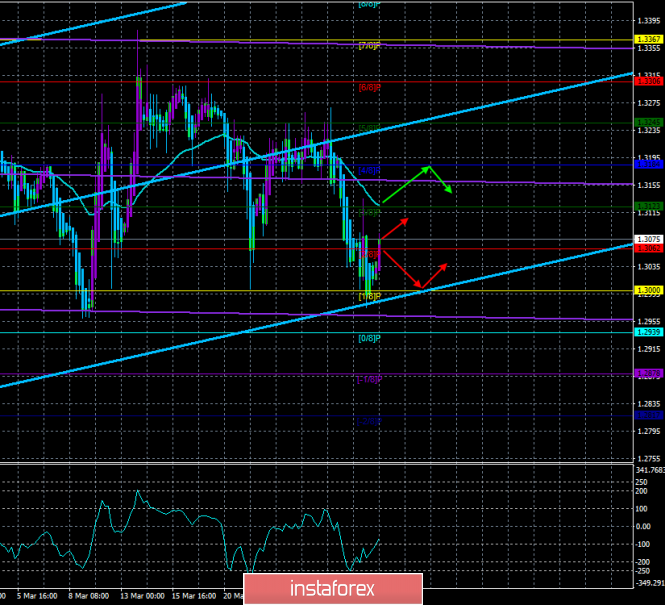 The GBP/USD currency pair began to adjust after the collapse last week. As for the prospects of the pound sterling, there is a new date for it X – April 12. On this day, the UK officially has to leave the EU in a "hard" scenario. But there are several "but". First, the UK together with the EU can postpone the release dates again. Then Britain will have to participate in the elections to the European Parliament, but these are trifles. Secondly, in theory, the British Parliament can vote for Theresa May's "deal" at least every day. It would not be more absurd than three rejections of the same agreement. Thus, three full months of 2019 have passed, and "things are still there". We still believe that in the current conditions, there is only one way at the pound sterling – down. More questions are raised by the fact why the pound is not lower than 1.2500? Perhaps market participants are still hoping that the parties (London and Brussels) will still be able to avoid a "tough divorce." However, the chances of this option are melting every day. There were also rumors that a new series of dismissals of ministers disagreeing with the policy of Theresa May could follow in the British Parliament. In addition, there is information that Theresa May is under pressure from the "tough" Brexit scenario.

The pair GBP/USD has started an upward correction. Since the trend is downward, traders are advised to wait for the color of 1-2 bars in blue and trade again for a fall with targets at 1.3000 and 1.2939.

Long positions will become relevant only after overcoming the moving average by traders. In this case, the tendency for the instrument to change again is upward, but from a fundamental point of view, there is little reason for this option.

The material has been provided by InstaForex Company - www.instaforex.com
GBP/USD. April 1. The trading system. "Regression Channels". The patience of the EU in the matter of Brexit runs out