GBP/USD. April 10th. The trading system "Regression Channels". Pound sterling is waiting for the results of the EU summit 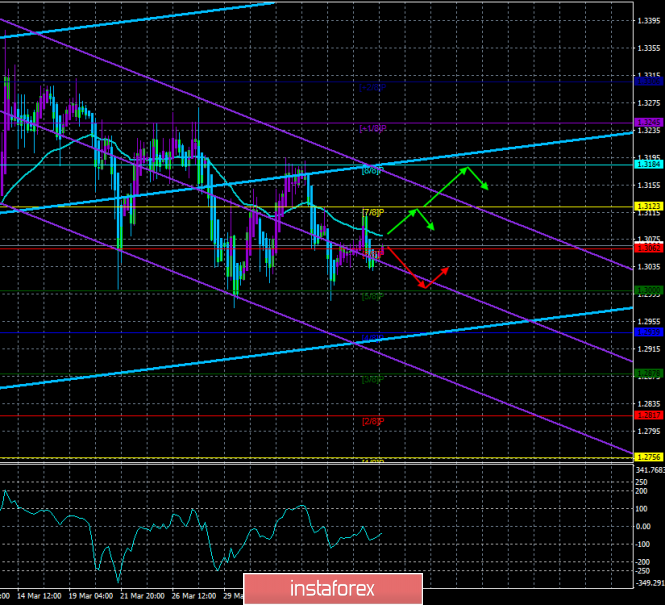 The GBP/USD currency pair maintains a downward trend, although it regularly makes attempts to overcome the moving average. For the British pound, today is no less important day than for the euro. First, the EU summit will take place today, during which Brexit issues will be discussed and a decision should be made to postpone the exit of the UK from the EU. The fact that the postponement will be granted, there is little doubt, the only question is the timing. Theresa May wants a delay until June 30, the European Union offers a delay of one year, and some of its leaders are against the delay. It is worth noting that if the EU does not approve the postponement of the Brexit, then the output will happen on April 12, that is, the day after tomorrow and under the "hard" scenario. Secondly, the UK GDP for March will be published today, and, according to experts, there will be zero growth of this most important indicator. Such a low value of GDP can cause pressure on the pound sterling. After lunch, we are waiting for a report on inflation in the US, where the forecasts are very positive, which can also support the US dollar. From a technical point of view, the pair cannot break through Murray's level of "5/8" – 1.3000, although it has a pronounced tendency to decline, based on both technical factors and fundamental ones

The GBP/USD pair started another upward correction. Today, we can expect the pair to move in any direction, as there will be a large amount of important news. So far, short positions with the target of 1.3000 are relevant, but after the completion of the correction.

Buy-positions can be considered after fixing the pair above the moving average, but only with "short" targets – 1.3123 and 1.3184.

The material has been provided by InstaForex Company - www.instaforex.com
GBP/USD. April 10th. The trading system "Regression Channels". Pound sterling is waiting for the results of the EU summit