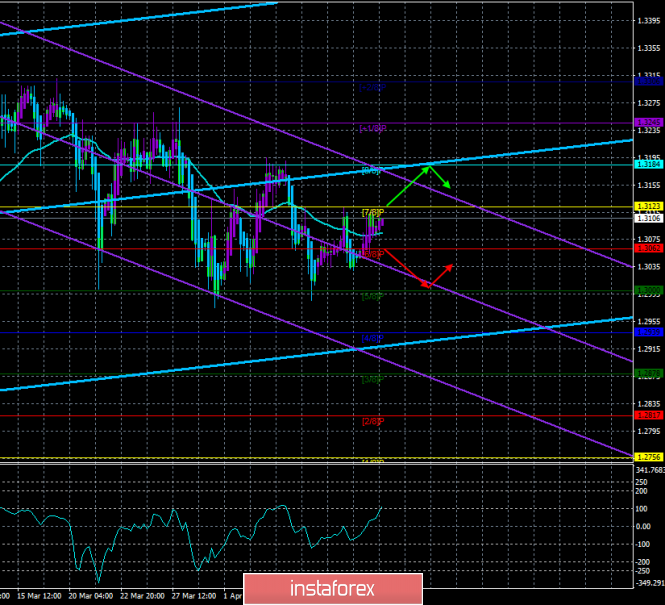 The GBP/USD currency pair has again overcome the moving average line, however, it remains in complete uncertainty. Despite a large amount of important macroeconomic information published the day before, the pair did not manage to overcome the Murray level of 1.3000 (even there was no attempt) and leave above the Murray level of 1.3123. The pound sterling received little support due to the decision taken at the emergency EU summit regarding the extension of the UK release dates, as well as the Fed's protocol, which stated that there were no plans to raise the rate in 2019. Now Donald Tusk must hold talks with Theresa May and approve a new date for Brexit, then it must be approved by the British Parliament. Thus, as we expected, Brexit will be postponed for at least several months, at most until October 31, 2019. Now, the British government will have to start a new job to agree on the version of Brexit. On Thursday, no important macroeconomic publications in the States and the UK are planned. At the European trading session, a surge of activity is possible, due to the fact that the Europeans were deprived of the opportunity to respond to the evening news of yesterday.

The pair GBP/USD has fixed above the MA, but not the fact that it will continue to move up. The level of restraint is 1.3123. If the price manages to overcome it, then it will be possible to open long positions with the target at 1.3184.

Sell positions can be considered after fixing the pair below the moving average line and the level of 1.3062. In this case, you can count on a decline to 1.3000.