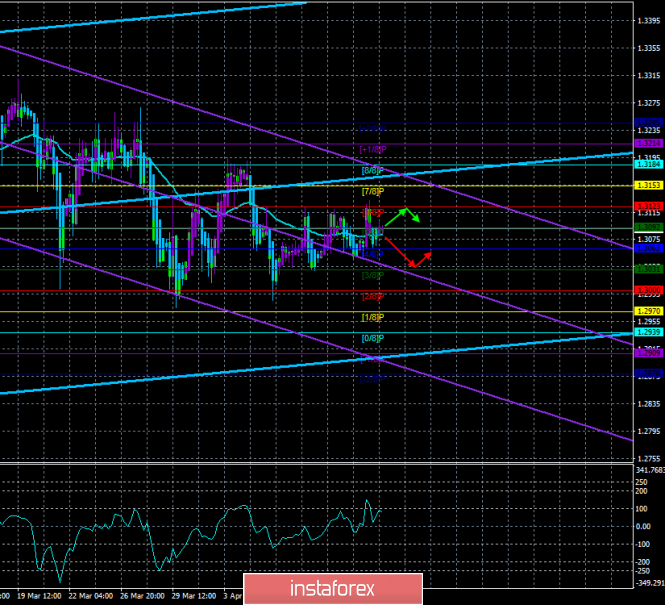 The currency pair GBP/USD after it became known that Brexit will not take place in the next 6 months is stuck tightly between the levels of 1.3000 and 1.3120. Traders have not yet decided on a strategy for further trading, so the volatility of the instrument has greatly decreased, and there is no trend movement. At the moment, the pair has already worked out the level of 1.3123 three times and each time bounced off it. There have been no reports of Brexit over the past few days, and in the coming months, when there is simply no rush, the news density on this topic will be much lower than in recent months. Market participants can now only wait until the trend movement resumes, as trading in flat conditions with reduced volatility is risky and unprofitable. What can bring the pound out of the sidewall? First, any strong news on Brexit. Secondly, any events in the political sphere of the UK. Despite the fact that Brexit moved, the question "what's next?" stays in the air. It is clear to everyone that the Parliament will not accept the current version of the agreement. So, either a new agreement with the EU is needed, or radically new solutions to the problem, up to the second referendum. It is because of this variation of potential options for Brexit and remains unclear how it will end.

The GBP/USD pair is located right next to the MA, and the market is still calm. Thus, formally now are relevant long positions with targets at 1.3123 and 1.3153, but it is recommended to retrace these goals very carefully and cautiously or not to reject at all.

Sell positions can be considered after the pair is fixed below the moving average line with targets at 1.3031 and 1.3000 and also very carefully and accurately or remain out of the market until the end of the flat.

The material has been provided by InstaForex Company - www.instaforex.com
GBP/USD. April 15th. The trading system "Regression Channels". Uncertainties on Brexit has become even more