GBP/USD. April 16th. Results of the day. Brexit goes into the background. The pound is waiting for a new fall 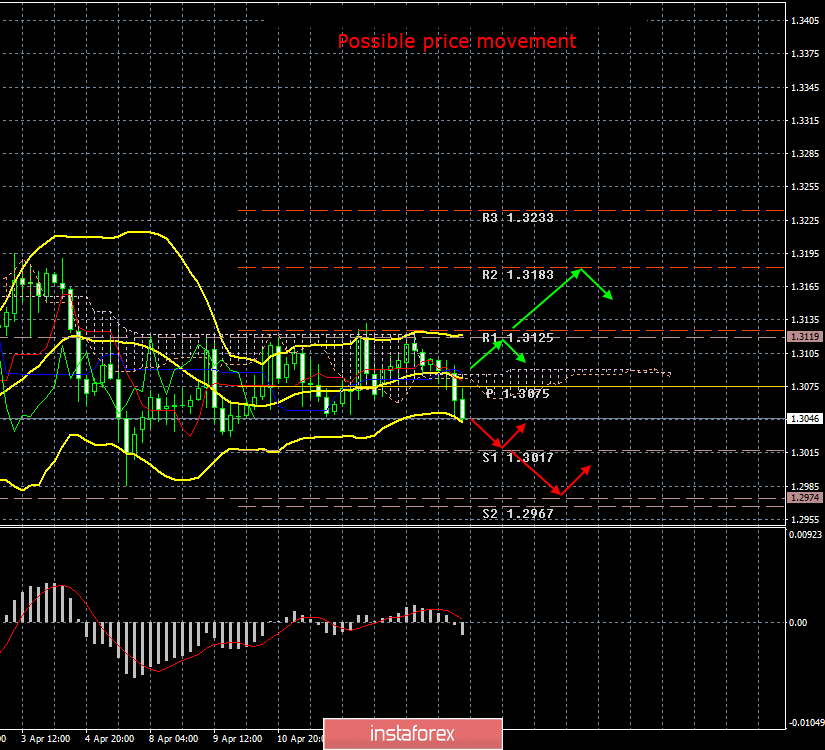 On Tuesday, April 16, the British pound, since it failed to overcome the resistance level of 1.3119, has started a downward movement that could grow into a full-fledged downtrend. Recently, traders have not spoiled their activity, so the volatility of the GBP/USD pair has also decreased to values unusual for the instrument. However, this could not last forever. Now the pair has taken its first step towards resuming a downward trend. The most interesting thing is that from a fundamental point of view, it was the pound sterling that should have risen in price today, since all the UK macroeconomic data published today were not disappointing. The unemployment rate remained unchanged, 3.9%, the average wage, taking into account and excluding bonuses grew in February by 3.5% and 3.4% respectively, which is fully in line with experts' forecasts. Only the number of applications for unemployment benefits in March slightly exceeded the forecast value. However, the report on industrial production in the US turned out to be weaker than forecast. As for Brexit, there is no new information on this issue. New important data. Donald Tusk believes that Brexit will not be the end of the European Union, and Theresa May's government is preparing for a "hard" Brexit scenario. We believe that in the near future news on this topic will be much less than before, so traders need to switch to other factors. In particular, the technical ones, which have long predicted a new fall in the pound sterling, given its inability to overcome the Ichimoku cloud at least three times.

The GBP/USD currency pair has failed to overcome the Senkou span B line and could resume its downward movement. Thus, it is now recommended to consider short positions with targets levels of 1,3017 and 1,2974.

Buy orders are recommended to be considered not earlier than overcoming the level 1,3125 with a target of 1,3183. However, significant fundamental information will be needed in order to support the bulls.

The material has been provided by InstaForex Company - www.instaforex.com
GBP/USD. April 16th. Results of the day. Brexit goes into the background. The pound is waiting for a new fall