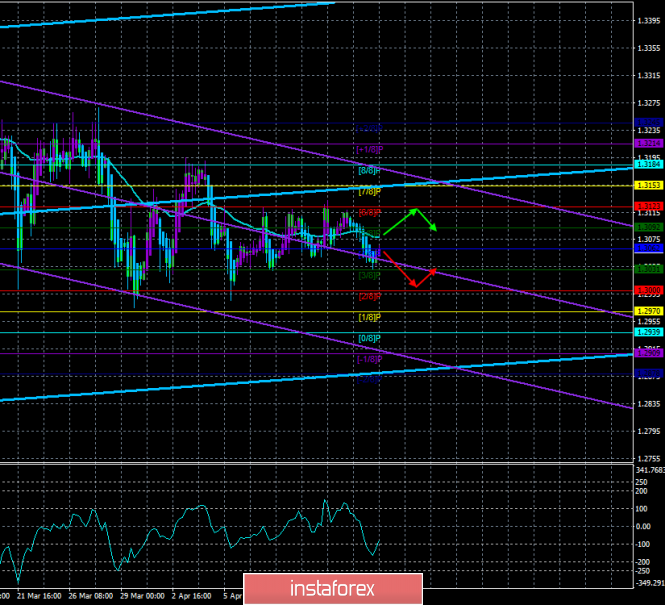 The GBP/USD currency pair is trying to break out of the side channel, but the lower limit of this channel, limited by the Murray level of "3/8" - 1.3031, was not overcome yesterday. Thus, despite the downward tangible break of the pair, it remains in the flat with low volatility. The strong support level for the pair is now two – 1.3031 and 1.3000. If you look closely at the illustration, it is clear that the pair have been working on them 5 times lately. Thus, until these levels are overcome, the fall in the GBP/USD pair will be limited. In the UK, a report on inflation will also be published today. In accordance with the forecasts of experts, it is expected to accelerate in annual terms from 1.9% to 2.0%. This is positive news for the pound, but will it be taken into account by investors? Recently, the pound is frankly in one place, not very much reacting to the news. It seems that traders are very disappointed with the final decision on Brexit and do not know how to trade the pound sterling in the future. However, in any case, the market will sooner or later move from the dead point. This can be caused by large transactions in the foreign exchange market from large players not for profit. Such an event can provoke the formation of a new trend.

The pair GBP/USD has fixed below the MA, however, its potential fall is limited by the levels of 1.3031 and 1.3000, the first of which has already been worked out and has not been overcome. Thus, a further decline is questionable, unless the report on inflation in the UK is frankly a failure.

Buy-positions will formally become relevant after the pair is fixed above the moving average line with a short target of 1.3123 – this is the upper limit of the side channel.

The lower channel of the linear – purple line unidirectional movement.

The material has been provided by InstaForex Company - www.instaforex.com
GBP/USD. April 17th. The trading system "Regression Channels". Traders are waiting for action from major players and inflation