GBP/USD. April 24th. Results of the day. There are still no growth factors for the pound sterling 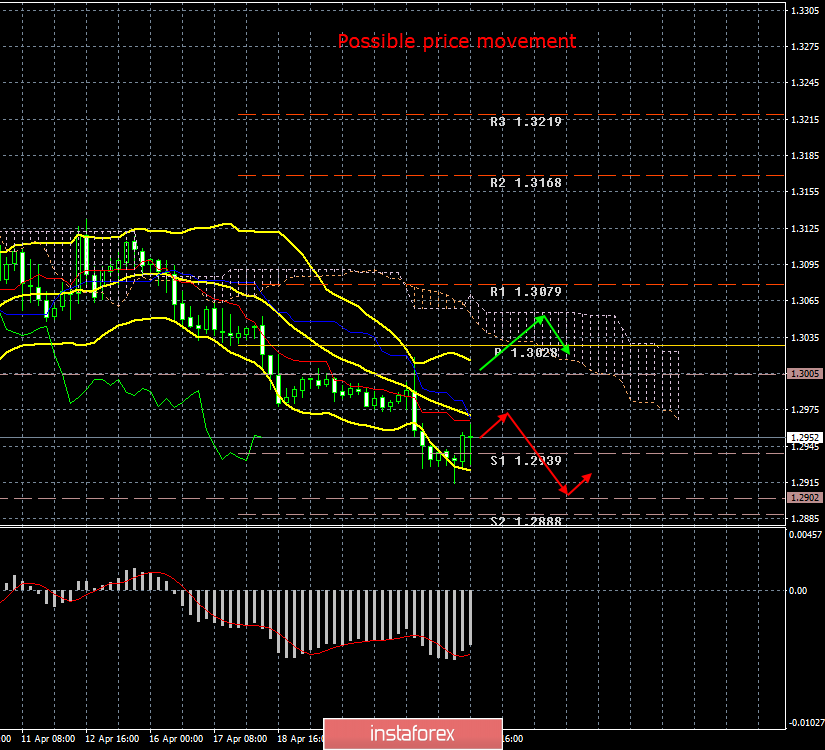 On Wednesday, April 24, the British pound sterling began the weakest round of an upward correction and has almost completed the critical line. New important data on the topic of Brexit is still there. Therefore, the current correction is purely technical. The only macroeconomic report of today - the net borrowing of the public sector in the UK - turned out to be weaker than expected, but at the same time had no effect on the course of trading. Compared to yesterday, the volatility has decreased, which is logical, given the lack of important news. Therefore, yesterday's tumble seems like it occurred because a major player has entered the market with purchases of the US dollar. In general, as we have repeatedly mentioned, the pair's trend continues to be downward, and only a fall can be predicted in the current situation. Thus, the rebound in prices from the Kijun-Sen line may just provoke a resumption of the downward movement. The most awaited news from the British Parliament concerns the possible resignation of Theresa May. As already reported, some members of the Conservative Party are ready to announce a new vote of no confidence in the prime minister. Theresa May's resignation could lead to a stronger selling of the pound, at least in the short term. What can provide support in the coming months to the pound sterling is difficult to imagine. It is difficult to assume what can support the pound sterling in the coming months. Due to Brexit, macroeconomic indicators in the UK are falling, which implies that a rate increase by the Bank of England is out of the question. Therefore, upward corrections are possible, but the downward trend is likely to continue.

The GBP/USD currency pair started to adjust. Thus, sell orders with targets of 1,2902 and 1,288 remain relevant at the moment after the current correction, that is, after the price rebound from the Kijun-sen or after the MACD indicator turns down.

Long positions with small lots are recommended to be considered not earlier than when the Kijun-sen line has been crossed with a target level of 1,3005 and the Senkou span B line. However, bulls may need fundamental support, which still does not exist.

The material has been provided by InstaForex Company - www.instaforex.com
GBP/USD. April 24th. Results of the day. There are still no growth factors for the pound sterling