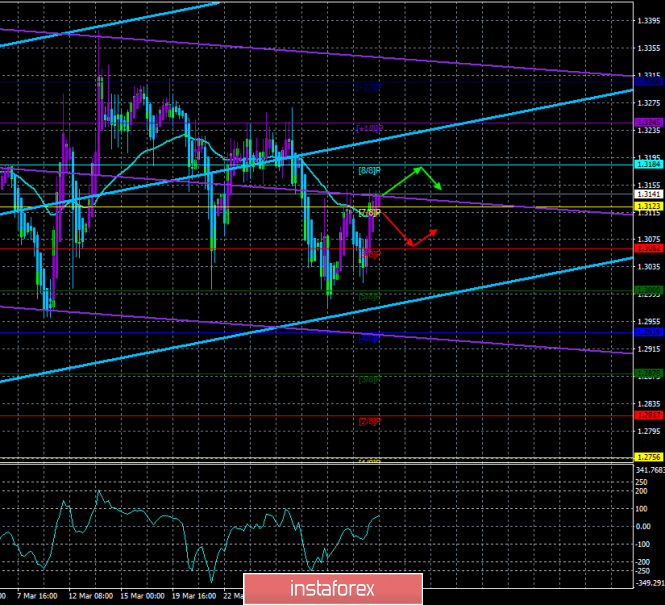 From a fundamental point of view, the GBP/USD currency pair failed to continue the logical downward movement and returned to the area above the moving average line. In the meantime, the whole Brexit procedure was on the verge of another transfer. This time, we are talking about next year. Theresa May herself wants to postpone Brexit to a date no later than May 22, in order not to participate in the elections to the European Parliament, and to spend the time gained in negotiations with the opposition forces with the aim of obtaining approval for at least some version of Brexit. The news that the country's withdrawal from the EU may be postponed is not perceived positively by the markets for the first time. It seems that the markets consider any transfer to be a postponement of the implementation of the "tough" Brexit scenario, as well as an increase in the possibility of holding a second referendum, or the refusal of Brexit in general. However, whatever the outcome of May's negotiations with the EU or with the Labor Party, in fact, the UK now has only one way – to organize new votes and hope that the majority will still be formed. However, if the last time the Parliament voted for all Brexit options in a row, several scenarios did not get just a few votes, which gives hope for their adoption in future votes. However, it is precisely these options that should be put on the agenda. In general, the pound received another temporary respite, and Brexit – a new portion of uncertainty.

The pair GBP/USD has fixed above the moving. Therefore, purchase orders with targets at 1.3184 and 1.3245 have become relevant again. Until a new negative has been received from Britain, the pound may strengthen for some time.

Short positions will become relevant only after the price is fixed back below the moving with the first target at 1.3062. Today in the UK, it is worth paying attention to the publication of the index of business activity in the services sector.

The material has been provided by InstaForex Company - www.instaforex.com
GBP/USD. April 3. The trading system. "Regression Channels". The European Union proposes to postpone Brexit to 2020