GBP/USD. April 4. Results of the day. The British pound still tends to fall 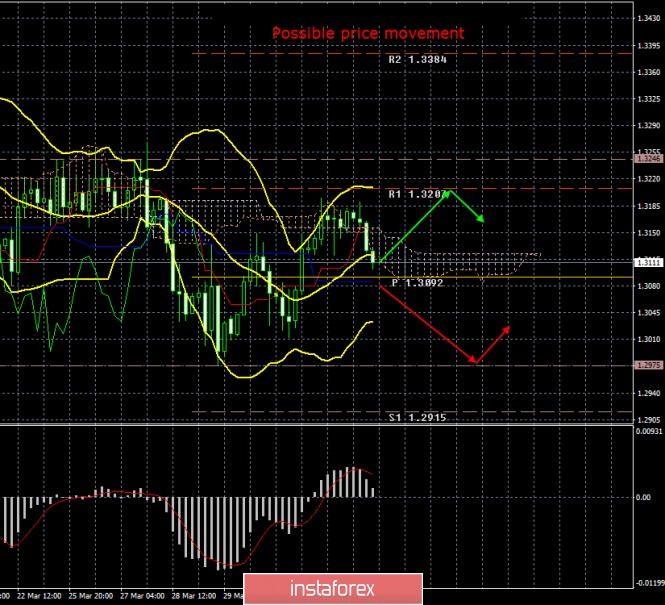 The British pound against the background of all the twists and turns with Brexit managed to rise to the upper limit of the Ichimoku cloud, but today it has fallen in price, which is more logical from a fundamental point of view. We remind you that at the moment the British Parliament has not decided on the option of leaving the EU, which will satisfy the majority of deputies. With a grief in half, by a margin of one vote, the deputies adopted a bill that allows Brexit to be postponed to a later date. However, the EU does not want to postpone Brexit without guarantees of accepting the agreement reached with Theresa May. Thus, the whole procedure has once again reached an impasse, and even news on this topic has not been received today, which is rare. How this entire mess will end is still incomprehensible. Only one thing is clear – the pound will be inclined to fall until some decision is made on Brexit. How the pound has not yet gone to conquer new lows is unclear. From a technical point of view, the pair has now dropped to the critical line. In the case of overcoming this line, the trend for the pair will again change to descending. Then we will again expect a downward movement below 1.2950. Tomorrow, by the way, an important report of NonFarm Payrolls in the United States will be published, and if its value is low, then in the short term, the pound may again become more expensive. Otherwise, downward movement will follow, at least to 1.2975. Well, Theresa may can only re-negotiate with Juncker on transfers, and convince everyone that consensus is still possible in Parliament.

The GBP/USD currency pair is being adjusted against the "golden cross". Thus, in the event of a price rebound from the critical line, the upward movement may resume. In this case, it is recommended to trade for an increase in small lots with the target at 1.3207.

It is recommended to open sell orders if the bears manage to overcome the critical line with the target at 1.2975.

The material has been provided by InstaForex Company - www.instaforex.com
GBP/USD. April 4. Results of the day. The British pound still tends to fall