GBP/USD. April 4. The trading system. "Regression Channels". Theresa May will try to negotiate with Jeremy Corbyn 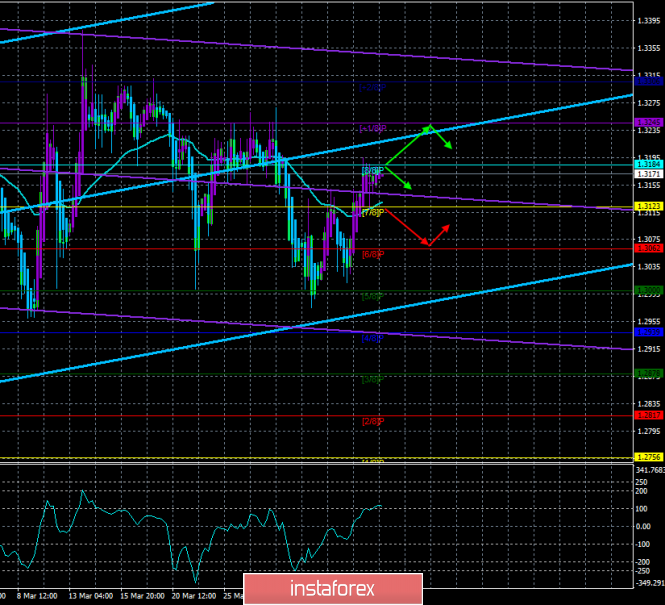 The currency pair GBP/USD still overcame the moving average line, so the trend in the instrument again changed to an upward one. Yesterday, late in the evening, the British Parliament with a margin of one (!!!) vote approved a bill that allows Theresa May to ask the European Union for a new respite for Brexit in order to avoid an unorganized exit. It is reported that next week, Theresa May will ask for a delay of at least 9 months. At the same time, Jean-Claude Juncker announced that London will not be given a new delay if the decision on an agreement on Brexit is not made until April 12. That is, London needs to accept an agreement with the EU, then further discussions of the transfer will be possible. It is also possible that May will request a postponement until May 22 in order to get time to negotiate with Labor Leader Jeremy Corbyn in order to accept her version of an agreement with the EU. However, there are still many "buts" in this whole story. First, in any case, Labor must still be able to agree. May's mere resignation, if her Brexit plan is adopted, does not suit anyone. We are still talking about the future of the country. Secondly, the Parliament has not yet decided on what scenario the country should leave the European Union. It is strange to see that against the background of this news, the pound is growing again. No important reports are expected from the States and the UK today.

The pair GBP/USD has fixed above the moving. Therefore, purchase orders with targets at 1.3184 and 1.3245 have become relevant again. Until a new negative has been received from Britain, the pound may strengthen for some time.

Short positions will become relevant only after the price is fixed back below the moving with the first target at 1.3062. This option is more preferable, but the pound is now in a zone of turbulence, and traders simply do not always know how to react to incoming news.

The material has been provided by InstaForex Company - www.instaforex.com
GBP/USD. April 4. The trading system. "Regression Channels". Theresa May will try to negotiate with Jeremy Corbyn