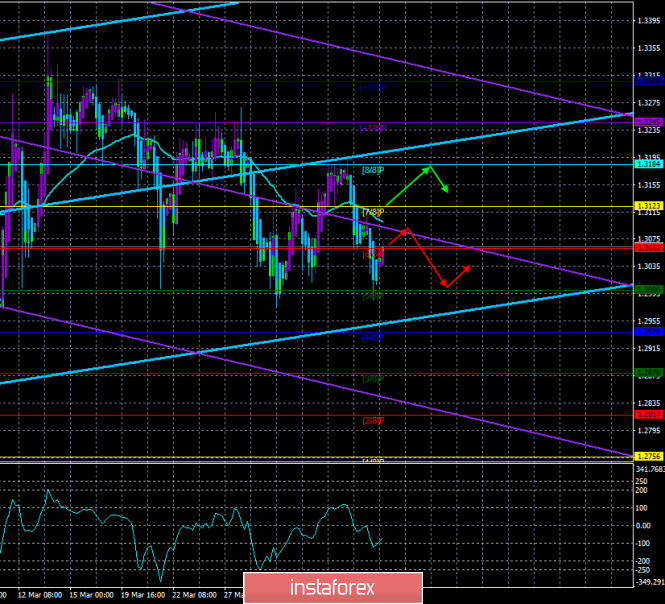 The currency pair GBP/USD continues to "storm" because of the uncertainty associated with Brexit. Nothing new. Theresa May made another statement in which she informed the Parliament and the public that Brexit might not take place at all if the approval process of the "deal" would be delayed further. She also said that she wants the country's withdrawal from the EU to take place according to an orderly scenario. Since the British Parliament rejected the "deal" with the EU proposed by May three times, then, according to the Prime Minister, there are only two ways: either to accept her agreement anyway or to abandon the idea of leaving the European Union altogether. May's plans include new negotiations with EU leaders, which allows extending the EU exit period for another 6 weeks, during which, Theresa May will again try to convince the Parliament to accept her Brexit version. That is, we can already assume that the Parliament will vote on this "deal" for the fourth and possibly fifth time. Until it is approved, or the EU runs out of patience and the UK leaves the bloc without any agreements. By the way, the "nearest release date" is April 12. So far, there have been no reports that the EU has agreed to move it. They will agree to its transfer only with the provision of guarantees that the agreement reached will nevertheless be approved by Parliament. What guarantees can May provide? Personal promises?

The pair GBP/USD has started a new round of upward correction, and in general, can not overcome the level of 1.3300. Traders are now in complete confusion, as it is not clear how Brexit will end. Accordingly, no one opens long-term positions. Short positions with a target of 1.3000 after the completion of the next round of correction are relevant.

Buy-positions can be considered after fixing the pair above the moving average, but only with a "short" target – 1.3184.

The higher linear regression channel is the blue lines of the unidirectional movement.

The material has been provided by InstaForex Company - www.instaforex.com
GBP/USD. April 8. Trading system "Regression Channels". Theresa May: Brexit may not take place