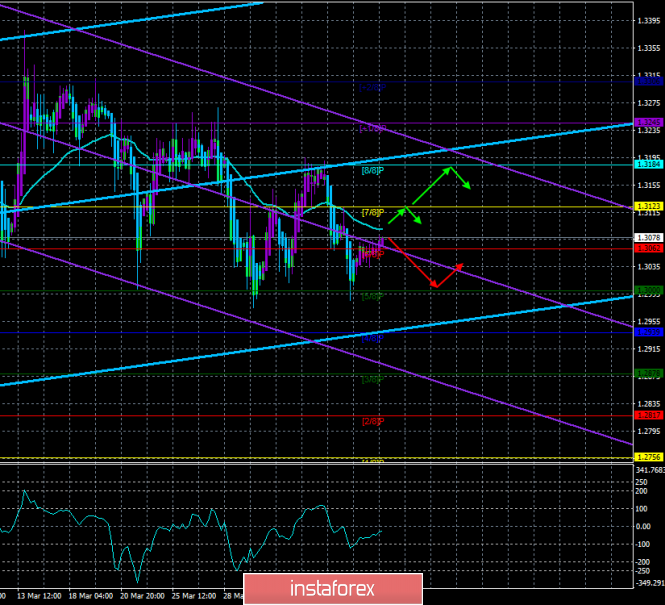 The currency pair GBP/USD has again adjusted to the moving average line and can easily overcome it, considering the "swings" that we have seen in recent weeks. Meanwhile, the UK has passed a law that obliges Theresa May to request a deferment of Brexit from the European Union. By and large, this law is nothing more than insurance against a possible "tough" Brexit scenario. London, asking for a postponement was clear to everyone and without the relevant law. However, Theresa May has much less room for maneuver now, her duties are clearly spelled out in the new law. Now we need to wait for the reaction of the European Union, which also offers a postponement, but at least a year. In the coming days, information will be received on which agreement the parties will come to in this matter. Based on this decision, it will be possible to assume further developments. In the meantime, the downtrend for the pair remains, but there are serious problems with overcoming Murray's level of "5/8" - 1.3000. There were already three unsuccessful attempts to overcome. Thus, while the price is below the MA, you can count on a fourth attempt. However, leaving the pair higher than the MA can mean that they are ready to grow by 50-100 points. This was the end of the previous two fixations above the MA.

The pair GBP / USD has started a new round of upward correction. Traders are now completely confused since it is completely incomprehensible how Brexit will end. Accordingly, few people consider long-term and medium-term positions. Short positions with a target at 1.3000 after the completion of the next round of correction are relevant.

Buy positions can be considered after the pair is fixed above the moving average, but only with a "short" target – 1.3184.