GBP/USD. April 9th. Results of the day. Tomorrow, the pound is waiting for high volatility trading 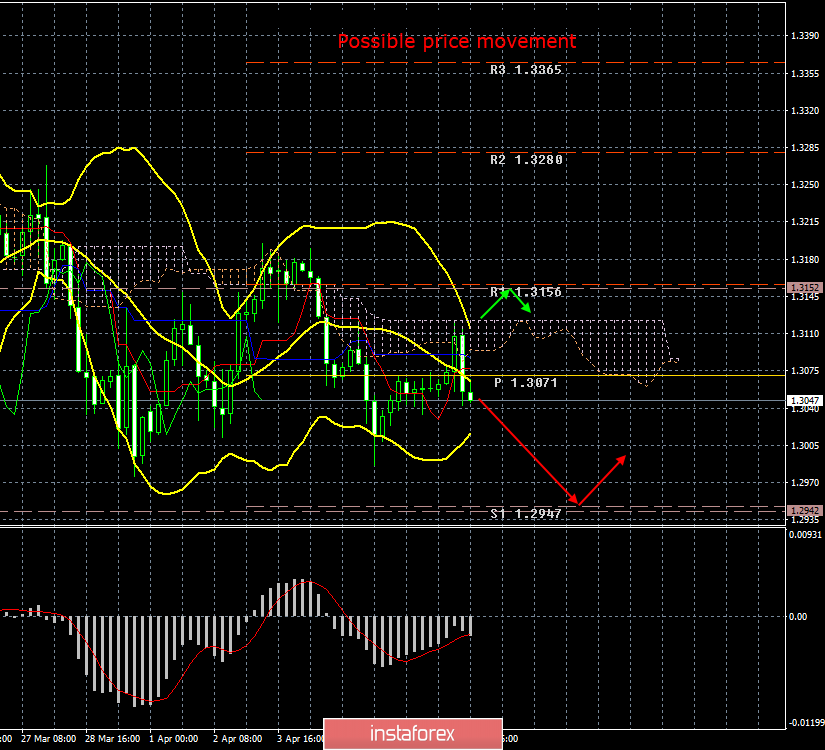 On Tuesday, April 9, the British pound sterling rushed up, but on its way it met an insurmountable obstacle in the form of Kijun-sen and Senkou span B lines, which led to the currency's pullback from the intraday highs it reached. There were no important publications in the UK today, and there was only one message on Brexit, which stated that Theresa May held talks with Angela Merkel in Berlin regarding a possible delay of Brexit until June 30. Then she went to Paris to hold similar negotiations with Emmanuel Macron. Tomorrow is an important day for the pair, as a large number of important macroeconomic reports will be published during the day, an emergency EU summit devoted to Brexit will also be held, and the minutes of the last Fed meeting will be published. In addition to this, publication on UK GDP in March, as well as US industrial production and inflation in March. Forecasts for GDP and industrial production are very low, and inflation in the United States, on the contrary, is high. Thus, if the real values of these reports do not disappoint, the pound sterling may be under pressure on Wednesday, April 10th. As for the EU summit, then, most likely, it will decide on a deferment, the only question is for what time period. Perhaps it will be 2-3 months, as Theresa May wants, and a much longer period is possible, as Jean Claude Juncker wants. In any case, tomorrow you need to brace for strong movements in the instrument and sharp price reversals. The downward trend in the instrument persists, although the pair still cannot overcome the area of 1.2975 - 1.3002.

The GBP/USD currency pair is trying to resume a downtrend, but tomorrow's news may have a strong influence on the current trend. Thus, shorts with an outlook of1.2947 are now relevant, but tomorrow, with the release of all the important news and reports, increased caution is required.

Buy orders are recommended to be opened if the bulls manage to return the pair above the critical line and the Senkou Span B line with a target of 1.3152, which is located very close. Most likely, the pair will need to overcome the level of 1.3152 in order to form a full-fledged uptrend.

The material has been provided by InstaForex Company - www.instaforex.com
GBP/USD. April 9th. Results of the day. Tomorrow the pound is waiting for high volatility trading