GBP/USD: plan for the American session on April 5. Pound waiting for news on Brexit, while maintaining high volatility

To open long positions on GBP/USD, you need:

In the first half of the day, pound buyers failed to get above the resistance of 1.3122, which led to a downward correction in the pair and also missed the support range of 1.3072. At the moment, it is best to return to pound purchases after fixing above the resistance of 1.3072, and the emerging divergence on the MACD indicator can help the bulls in this. In this scenario, the demand for the pound will lead to a test of the maximum of the day in the area of 1.3122 and to an update of the level of 1.3160. In the case of a further decline of the pair after the report on the American labor market, it is best to return to long positions on the rebound from 1.3030 and 1.2979.

To open short positions on GBP/USD, you need:

The bears held the resistance at 1.3122, which led to a gradual decrease in the pound and consolidation below the support at 1.3072. An unsuccessful attempt to grow above this range in the second half of the day will be a direct signal to open new short positions in GBP/USD in order to update the lows around 1.3030 and 1.2979, where I recommend fixing the profits. In the scenario of a return to 1.3072, new sales of the pound can be considered from the high of the day in the area of 1.3122 and a rebound from the resistance of 1.3160.

Trading is conducted below 30-day and 50-day moving averages, which indicates that the bearish trend in the market remains.

The breakthrough of the lower border of the Bollinger Bands indicator in the area of 1.3054 will lead to a new wave of the pound decline. The growth will be limited by the average border of the channel around 1.3103. 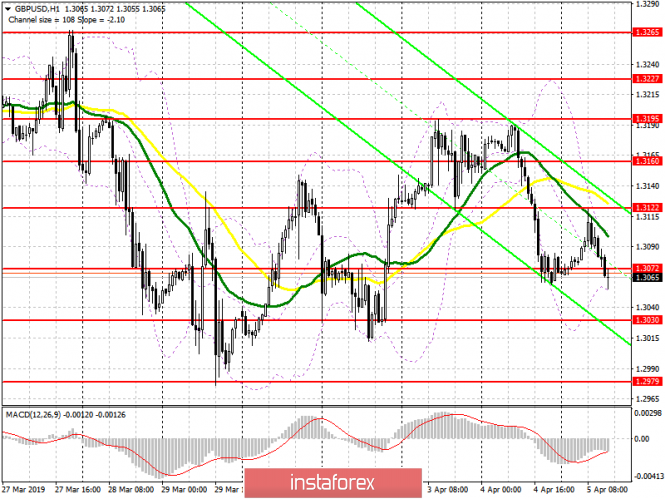 The material has been provided by InstaForex Company - www.instaforex.com
GBP/USD: plan for the American session on April 5. Pound waiting for news on Brexit while maintaining high volatility