GBP/USD: plan for the European session on April 10. Traders believe that the UK will avoid a hard Brexit scenario

Two days left before the UK leaves the EU without an agreement, but traders are in no hurry to sell the British pound, as they believe in a new postponement of the release date. Buyers currently need to return to a resistance of 1.3079, which could lead to a formation of an uptrend with the update of the upper limit of the side channel of 1.3119 and a test of the new high in the area of 1.3160, where I recommend to lock in the profit. In case of weak inflation data in the first half of the day, it is best to consider new long positions on a false breakdown from support at 1.3032 or to rebound from a larger low of 1.2988.

Any negative news on Brexit will put pressure on the British pound, however, the bears will count on a weak inflation report today, which could lead to a false breakdown at 1.3079 and the GBP/USD being sold near a low of 1.3032. Breaking through the lower border of the side channel will lead the pair to the support area of 1.2988 and 1.2950, where I recommend taking profits. In case of growth above a resistance of 1.3079 on good data on inflation, it is best to count on new short positions from the upper border of the side channel of 1.3119 or on a rebound from the high of 1.3160.

Trade is conducted in the region of 30 and 50 moving averages, which indicates the formation of a side channel.

In case of a successive wave of the pound's decline, support will be provided by the lower boundary of the indicator near 1.3032. 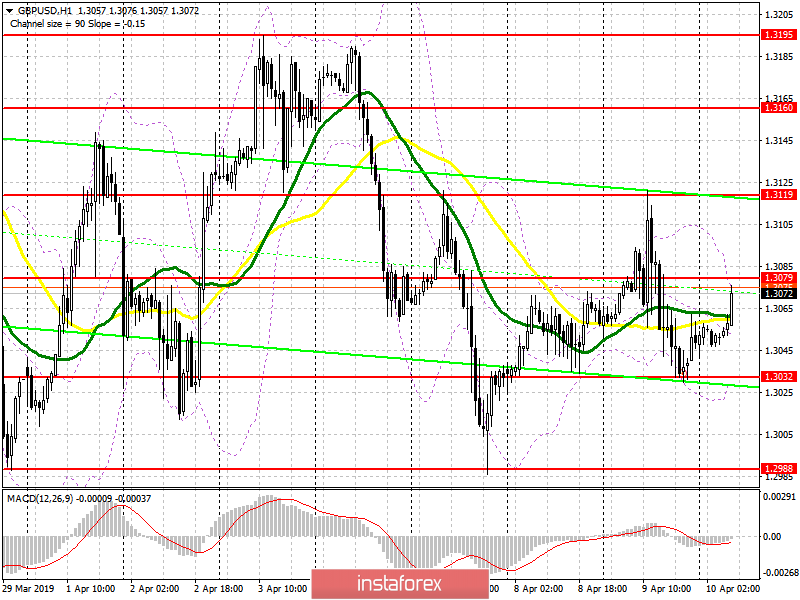 The material has been provided by InstaForex Company - www.instaforex.com
GBP/USD: plan for the European session on April 10. Traders believe that the UK will avoid a hard Brexit scenario