GBP/USD: plan for the European session on April 17. Labour and Conservatives cannot agree on a Brexit agreement

Yesterday's news that Labour and Conservatives could not yet agree on a Brexit agreement led to renewed pressure on the pound. At the moment, it's best to consider long positions in GBP/USD after returning and consolidating above the resistance of 1.3070, which will lead to updating the upper border of the wide side channel in the area of 1.3118, where I recommend taking profits. With scenarios of a re-wave of the pound's decline, which can be formed on weak inflation data in the UK, it is best to expect long positions after a false breakdown in the area of 1.3022, confirming divergence on the MACD indicator, or a rebound from a low of 1.2989.

The data that will be released today in terms of inflation can keep the pressure on the British pound. The formation of a false breakdown around 1.3070 will be the first signal to sell, and if the pound rises above 1.3070, you can sell for a rebound from a weekly high in the area of 1.3118. In the first half of the day, the main goal of the bears will be to reduce and update support at 1.3022, a breakthrough of which will open a direct path to the low of 1.2989, where I recommend taking profits.

Trade is conducted in the region of 30 and 50 moving averages, which indicates the formation of a side channel. 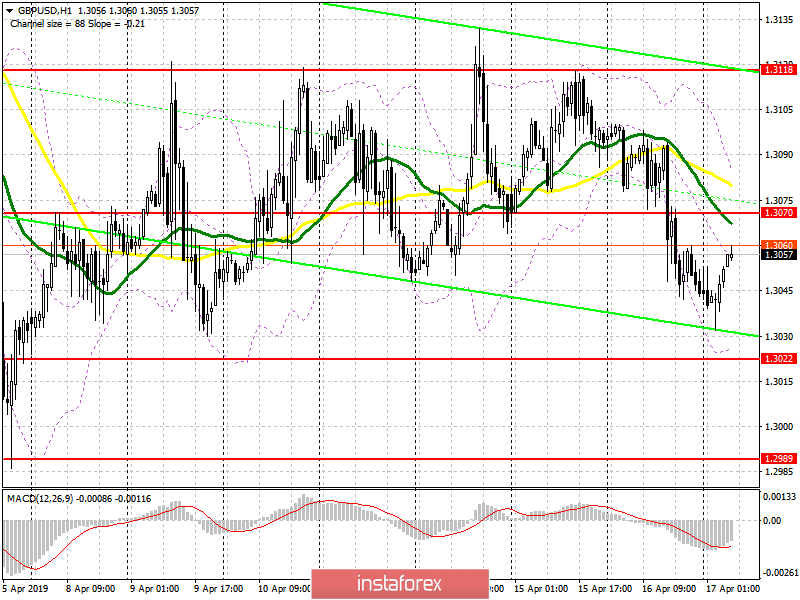 The material has been provided by InstaForex Company - www.instaforex.com
GBP/USD: plan for the European session on April 17. Labour and Conservatives cannot agree on a Brexit agreement