Yesterday, the British pound was in demand among traders even after a weak report on the service sector in the UK, as many expect that an agreement can be reached on Brexit and a more rigid scenario would be ruled out. It is best to return to buying the pound after the formation of a false breakdown in the intermediate support area of 1.3151, which will be a signal to open long positions. However, the optimal scenario for buying will be the test of lows of 1.3112 and 1.3072. The task of the bulls in the first half is to break through and consolidate above the resistance of 1.3193, which will lead the pair to a high near 1.3227 and 1.3265, where I recommend taking profits.

An unsuccessful consolidation above the resistance of 1.3193 will be a signal to sell the British pound, and a re-test of support at 1.3151 may lead to forming a larger downward correction for the pound in order to update the lows around 1.3112 and 1.3072, where I recommend to take profits. Under the pound growth scenario, above the resistance of 1.3193 in the first half of the day, it is best to consider new short positions to rebound from the highs of 1.3227 and 1.3265.

Trade is conducted above 30-day and 50-day moving averages, which indicates the formation of an uptrend. 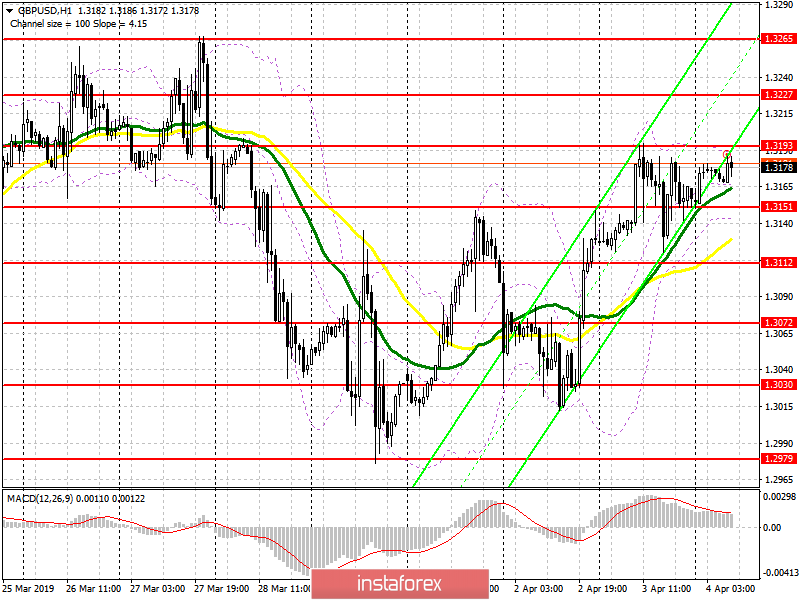 The material has been provided by InstaForex Company - www.instaforex.com
GBP/USD: plan for the European session on April 4. Pound buyers believe in Theresa May's success