GBP/USD: plan for the European session on April 23. The pound may resume its decline

To open long positions on GBPUSD, you need:

At the moment, the buyers' task is to return to the resistance level of 1.3009, which will lead to an upward correction in the maximum area of 1.3036, where I recommend taking profits. In the scenario of the pair's decline in the first half of the day, it is possible to look at long positions from the level of 1.2977, but only if a false breakout is formed. In the absence of demand in the area of 1.2977, purchases can be returned only to the rebound from the area of 1.2940.

To open short positions on GBPUSD, you need:

In the first half of the day, the bears need to return to the support area of 1.2977, the test of which will lead to the formation of large pressure on the pound and the resumption of the downward movement. In this scenario, you can expect on updating the lows in the area of 1.2940 and 1.2909, where I recommend taking profits. In the absence of pressure in the area of 1.2977, it is best to consider new short positions after the test of the upper border of the side channel in the area of 1.3009 or immediately to rebound from the maximum of 1.3036.

Trading is conducted below 30 and 50 medium moving, which indicates the preservation of the bearish market.

The volatility of the Bollinger Bands indicator is very low, which does not give signals to enter the market. 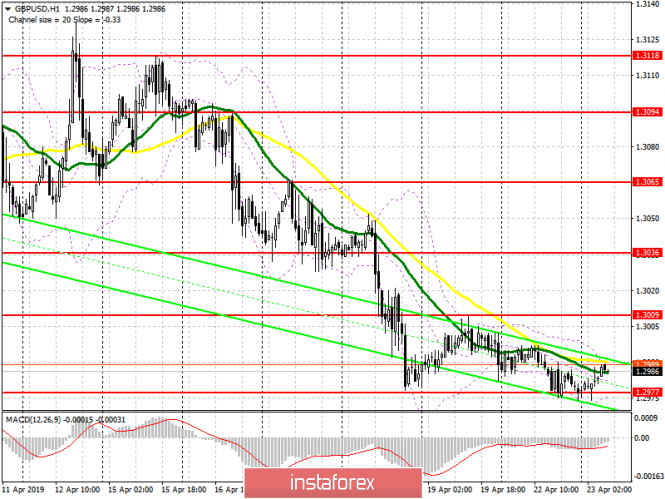 The material has been provided by InstaForex Company - www.instaforex.com
GBP/USD: plan for the European session on April 23. The pound may resume its decline