GBP/USD: plan for the European session on April 8. Buyers have returned from major support levels

The pound's decline on Friday led to a test of large levels of support and the formation of a new rising wave. At the moment, it is best to return to long positions after the support test of 1.3034, however, the main goal of the bulls will be a breakthrough and consolidation above the resistance of 1.3080, which will return the uptrend to the market and will lead to updating highs around 1.3118 and 1.3160, where I recommend taking profits. In the GBP/USD declines below the support level of 1.3034, long positions can be opened for a rebound from a low of 1.2988.

An unsuccessful consolidation above the resistance of 1.3080 will be a signal to sell the British pound, but the main task will be to return to the support level of 1.3034, a break of which will resume a larger downward wave in GBP/USD with updated lows in the areas of 1.2988 and 1.2950, where I recommend taking profits. In the event of a pound growth scenario above the resistance of 1.3080 in the first half of the day, it is best to consider new short positions to rebound from a high of 1.3118 and 1.3160.

Trade is conducted below the 30-day and 50-day moving averages, which creates a number of problems for buyers of the pound. A medium breakthrough will be an additional signal to buy.

In the scenario of a following wave of the pound's decline, support will be provided by the average indicator border around 1.3034, as well as the lower border of the Bollinger Bands indicator around 1.3005. A break of the upper border in the area of 1.3080 will strengthen the demand for the pound. 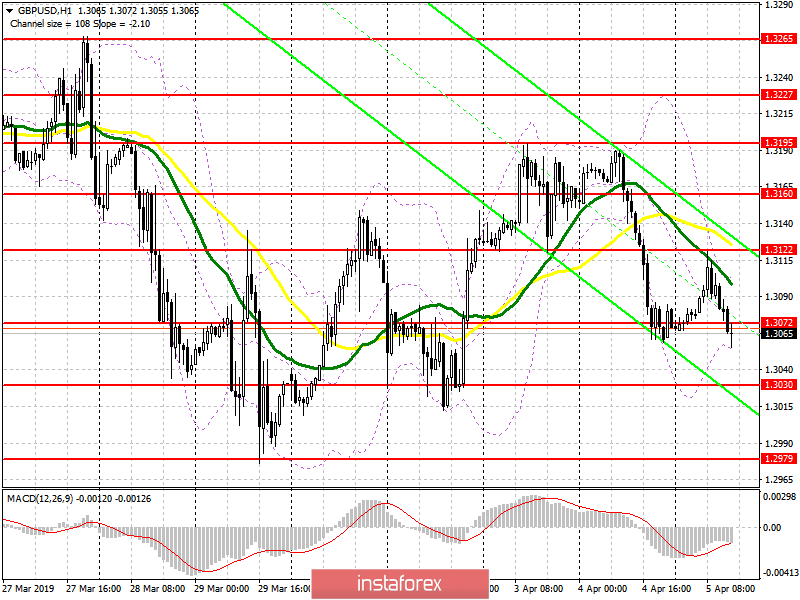 The material has been provided by InstaForex Company - www.instaforex.com
GBP/USD: plan for the European session on April 8. Buyers have returned from major support levels