Gold does not believe Central banks

After a stormy start, gold fans were forced to hold their horses. The US dollar was not as weak as investors expected it after the change in the Fed's outlook, and the US stock market was marked by the best quarterly result since 2009 and the best beginning of the year since 1998. The increase in global risk appetite is not the most favorable background for bulls in XAU/USD. The precious metal is considered to be a safe-haven asset, and the de-escalation of the trade conflict between Washington and Beijing and the associated rally of the world stock market clipped its wings.

From a fundamental point of view, the current consolidation of gold is fully justified. First, investors prefer not to force events on the eve of an important report on the state of the US labor market in March. As a rule, employment statistics are perceived as a kind of hint about further actions by the Fed. Secondly, the precious metal is affected by a group of heterogeneous factors: on the one hand, the fall in the yield of Treasury bonds gives it a helping hand, on the other - the strengthening of the dollar and the growth of stock indices, on the contrary, drown the analyzed asset. As a result, futures froze in the short-term trading range of $1280-1300 per ounce.

Despite the blurred ending, the first quarter, the first quarter can be brought to "bulls" on XAU/USD in an asset. Gold closed in the green zone, and ETF reserves rose by 38 tons. Central banks continued to be active, led by a regulator from Russia. In February, its reserves rose by 1 million ounces - the best result since November. According to the World Gold Council, in 2008, the Central Bank of the Russian Federation bought 274 tons of ingots, which is equivalent to $ 11 billion at average prices. Russia's share in the procurement of all regulators is 40%, in global demand for precious metals - 6%. For the first time in history, the scale of gold purchases by the Central Bank exceeded the production volumes in the country. The share of precious metals in gold and foreign exchange reserves increased to 20%, while the share of the US dollar decreased from 46% to 22%.

Dynamics of purchases and gold mining in Russia 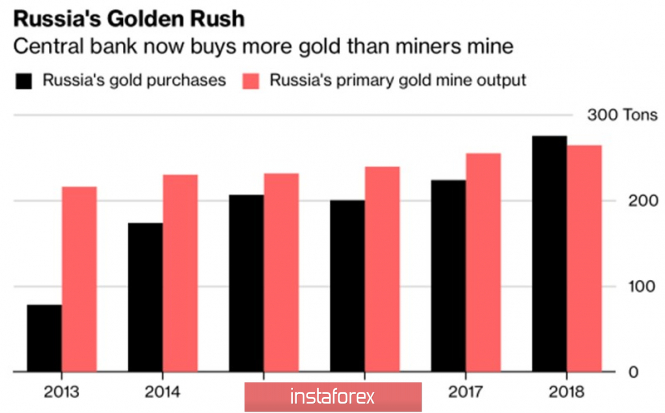 Obviously, Moscow's actions are aimed at reducing dependence on the United States in the context of economic sanctions by diversifying dollar assets into gold and yuan. If other countries follow the same path, then the demand for US currency will seriously suffer, which is a bullish factor for XAU/USD.

In general, the external background is moderately favorable for the analyzed asset. The slowdown in global GDP and the pigeon rhetoric of central banks are pushing down bond yields. As we move up the risks of correction of global stock indices grow. It is difficult to imagine that in the face of disappointing macroeconomic statistics, an increasing likelihood of completion of the economic cycle and recession in the US, the S & P 500 could go north indefinitely. Unless the Fed, under pressure from the White House, starts cutting rates. In this situation, the dollar will weaken, which the bulls on XAU/USD will immediately use.

Technically, the inability of gold to break above resistances by 50% and 61.8% of the CD wave increases the risks of activating the 5-0 pattern. For this, the "bears" need a confident assault of support at $1280 per ounce.

The material has been provided by InstaForex Company - www.instaforex.com
Gold does not believe Central banks