Trump's adviser and the head of the National Economic Council of the United States, Lawrence Cadlow, demanded the Fed to immediately reduce the rate by 0.5%, since, he said, it should not have been raised above 2%. In support of its position, Kadlow calls such a reason as the inversion of the yield curve, that is, trends in the debt market. Cadlow also points a slowdown in the global economy, the approaching recession in the eurozone and China's weakness.

On Monday morning, published data from China and Japan turned out to be the exact opposite. The Japanese Tankan for the 1st quarter was in red in almost all parameters. The activity index for large enterprises decreased from 14.3p to 1.2p, stopping literally half a step from the recession level. The forecast declined from 15p to 8p. Both indicators turned out to be noticeably worse than forecasts. After some changes in the monetary policy of the Bank of Japan, which once again made its top priority a return to 2% inflation, a possible strengthening of the yen against the backdrop of panic might trigger speculation that the Bank of Japan will launch a new wave of monetary stimulus.

At the same time, China's PMI showed growth in March, when no one expected it. The production index from NBS increased from 49.2p to 50.5p. The analogous index from Caixin rose from 49.9p to 50.8p. The service sector growth rate increased instead of the expected fall. 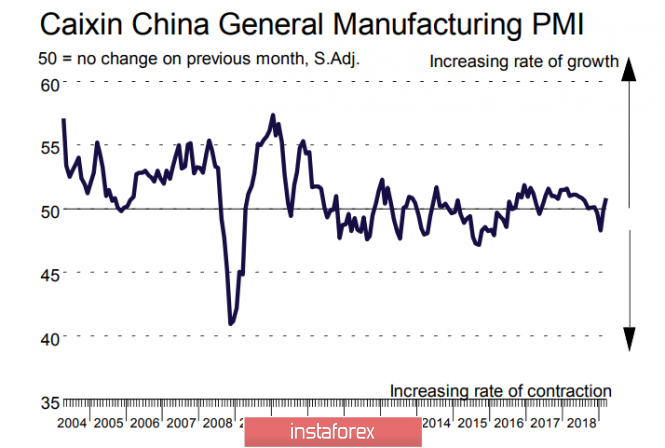 Reducing the threat of slowing China led to an immediate reaction in the markets. On Monday, the Shanghai Composite adds more than 2.5%, dragging all Asian indices. Oil rises in price, defensive assets fall in value, trading in Europe began with bond sales.

In the evening, it will become clear how American investors will react. On Friday, the yield on 10-year Treasures was still below 3 months, which historically always meant the approach of recession. As long as the markets are clearly in high spirits, the growth of oil and commodity currencies with a simultaneous weakening of the yen will still dominate for some time.

Business activity in the manufacturing sector in Germany in March fell to 44.1p against 44.7pa month earlier. In the eurozone the drop went from 47.6p to 47.5p. Both indicators were worse than expected and worse than preliminary results. The ECB received an unpleasant confirmation of its fears, the operation TLTRO3, aimed at lending to the real sector of the economy, looks more and more justified. In the future, the increase in rates of 12 months is almost impossible. The euro is under pressure and is able to test the recent minimum of 1.1175 in the coming days.

The final data on UK GDP coincided with forecasts. Growth in Q1 was 0.2%, year-on-year growth of 1.4%, and a significant slowdown was avoided due to growth in government and consumer spending. 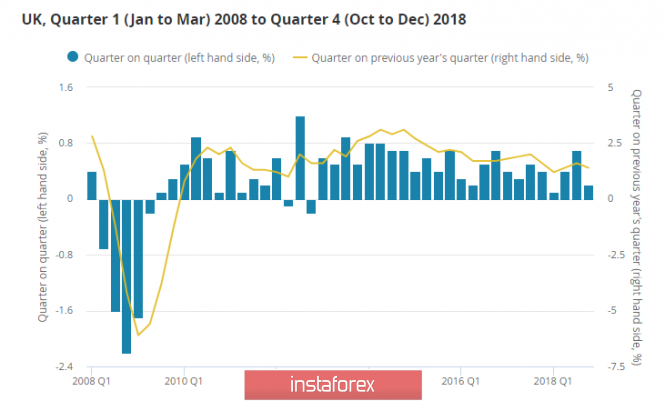 At the same time, there is still no positive dynamics in business investments. On an annualized basis, the decline was 2.5%, and the current account deficit amounted to 4.4% of GDP in the first quarter.

Uncertainty led to a fall in property prices in London to 10-year lows, and this is probably not the limit. Despite the fact that Theresa May promised to resign in June in exchange for support, the parliamentarians again rejected the draft agreement on withdrawal from the EU, thus increasing the likelihood of withdrawal without any document at all.

This event may occur as early as April 12, two days before the designated date, the EU will hold an emergency meeting, during which, probably, the two economies will finally become separated.

The pound has no reason to resume growth and will remain under pressure. Possible correctional growth with high probability will be stopped in the 1.3110 / 15 zone and will be used for aggressive sales. The nearest target is 1.2960 / 70 with an eye at 1.2770 and below in case of a deepening political crisis.

The material has been provided by InstaForex Company - www.instaforex.com
Markets cheered on positive statistics from China