Markets intend to win back the accumulated positive

The ISM business activity index in the US manufacturing sector rose to 55.3 p in March against 54.2 p, which came as a surprise for experts who expected much more modest growth. The growth of ISM contributed to the continuation of the rally in the markets. The S & P 500 index rose to 2,869 pp, seriously aiming at the historical peak. Oil updated the 5-month maximum. Even though, the expected retail sales data are much weaker than in February, it did not prevent achieving positive growth.

Markets continue to play a number of bullish factors that have emerged in recent weeks - easing the Fed's monetary policy, reducing the threat of slowing China, as well as, positive expectations from trade negotiations, which, as US Treasury Secretary Mchuchin says, are developing in a constructive way.

However, for the last point, a reappraisal will soon be possible to occur- Beijing does not feel any desire to satisfy the demands for structural reforms. China understands that Trump needs a deal more than China, and therefore, the lack of a deal scenario is even more acceptable than a deal on bad terms.

Growth in consumer prices for March in the eurozone, according to preliminary data, amounted to 1.4% versus 1.5% in February. The growth of core inflation slowed down from 1.0% to 0.8%. Both results were worse than expected, and price pressure remained low.

Weak data changes the ECB's monetary policy expectations in favor of easing rather than tightening. Inflation is still well below the target of the ECB. 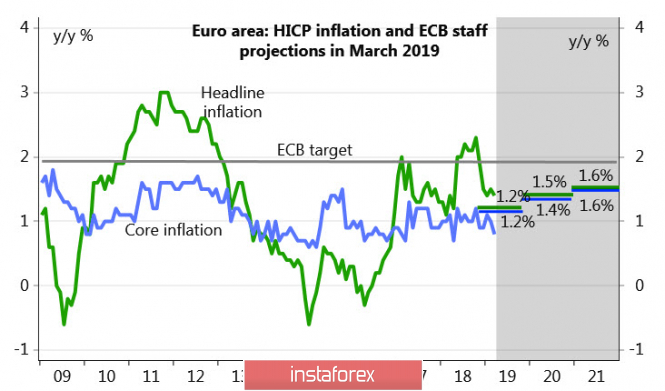 There are no signs of a price rise for services when it comes to reduced production. This is currently the main criterion that can somehow remedy the situation. The threat of a tough Brexit, which has increased after another unsuccessful attempt to accept an agreement on withdrawal in the UK parliament, will have a negative impact on the German economy, and thus will be able to predict the Federation of German Industry. The forecast for GDP growth for 2019 has been reduced from 1.2% to 0.7%. Amid a sharp drop in business activity, the decline in the forecast does not look excessive.

The euro remains under pressure. Today, an attempt to break through the support of 1.1175 is more likely to occur. This will, later on, lead to the triggering of stop orders and the strengthening of the downward movement.

The PMI index in the UK industry unexpectedly rose in March to a 13-month high, showing 55. 1n vs. 52.1 a month earlier.

The reason for such activity is that enterprises are massively preparing to leave the UK from the EU and carry out previously planned measures to stabilize their production indicators. Stocks of finished products in warehouses have grown to record levels, which led to an increase in output and employment.

The pound is waiting for further developments. There are only 10 days left until the "X" hour, which is scheduled on April 12. There is no option suiting all options. All chances for a soft scenario were rejected by the British side. Meanwhile, the British economy will have to encounter a lot of problems, including the increase in the outcome of capital from London.

On Tuesday, the pound will continue to trade in the range bounded below by the support of 1.2958 / 65, above the resistance of 1.3090 / 3105. There is no single direction. The threat of a decline following the euro looks a bit more likely to show up.

The beginning of the recession is anticipated. This further triggers nervousness, which has not bypassed New Zealand. The NZIER quarterly survey shows that 27% of enterprises expect economic conditions to deteriorate in the coming months. A significant number of enterprises indicated a decline in demand, and the index fell by 29%. 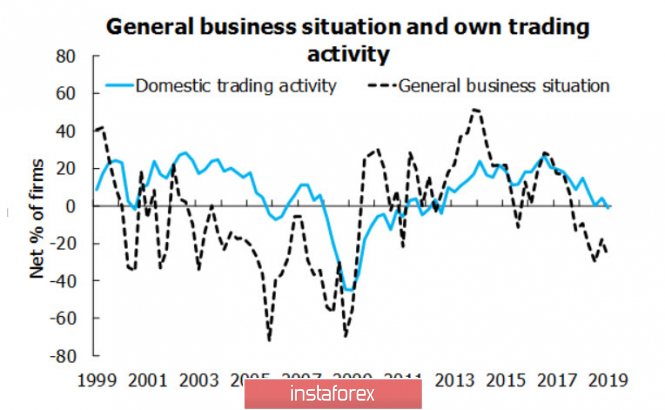 Due to a decrease in demand, enterprises find it increasingly difficult to remain within the limits of profitability even in the face of rising prices. As a result, more and more firms expect a decline of investment. On Tuesday, the price index for dairy products is expected to be published. A weak growth of 0.3% is predicted against 1.9% 2 weeks ago. Since February, the dynamics is negative and the result is not better than the forecasts. This will, in turn, increase the pressure on kiwi.

Over the past 6 months, NZDUSD tried to attack the resistance of 0.6940 / 60 for. However, all the three attempts were unsuccessful. Kiwi is under pressure. The closest targets are 0.6949 and 0.6916. In case of worsening foreign economic background, a bearish trend may strengthen and try to get to support 0.6650 / 70.

The material has been provided by InstaForex Company - www.instaforex.com
Markets intend to win back the accumulated positive