Simplified wave analysis of the main currency pairs on April 10

The market of the major euro pair is dominated by a downtrend. All counter movements are corrosive. The last short-term wave structure was launched on March 3. In the larger model, it began to form the final part (C). From March 20, the middle part of the wave develops, which is still unfinished.

Over the next trading sessions, a moderate price increase is expected to the limits of the calculated resistance. A break in the upper boundary of the zone is unlikely. Next, we should wait for the formation of a turn and the beginning of a decline.

Purchases within the day have little potential and can only be used for scalping. It is more promising to wait for the signals of the exchange rate change and look for the signals to sell the instrument. The preliminary downward potential is limited by the support zone. 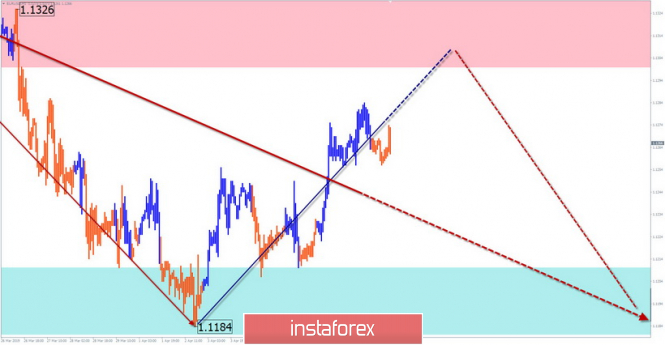 The large-scale charts of the British pound have a stable bearish trend. Since the end of last year, a correctional wave has been developing upwards, the potential of which has almost been exhausted. An unfinished wave of the scale H1 is starting from March 13. The wave is bearish, the middle part is being formed in it (B). The preliminary target lift zone is in the area of the resistance zone.

At the next sessions, a flat mood with an upward vector is expected. Since all traffic goes up against the course of the main trend, the magnitude of stroke is likely minimal. The beginning of the downward movement is expected at the end of the day.

Buying a pair in the next few hours has little potential, while it is more reasonable to reduce the lot. Lots for sale will have a great prospect. It is better to look for reversal signals in the area of the calculated resistance. 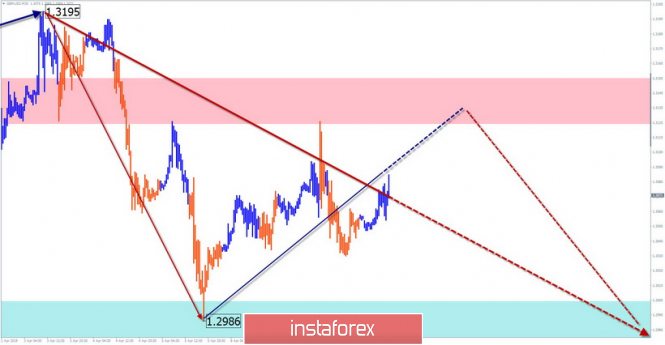 Since the beginning of this year, the Japanese price movement course is ascending. Considering that in a larger wave model this section completes the design, the nature of the price movement is close to impulse. The last short-term wave started on March 25th. In recent days, the correctional part (B) of the wrong kind has been completed there. The settlement zone is located in the support area.

The downward movement can be completed in the next sessions. The price may briefly push the lower support line, but the probability of this is small. The beginning of price growth is likely at the end of the day or tomorrow.

Selling the pair is quite risky. It is recommended to monitor the instrument purchase signals in the support area. 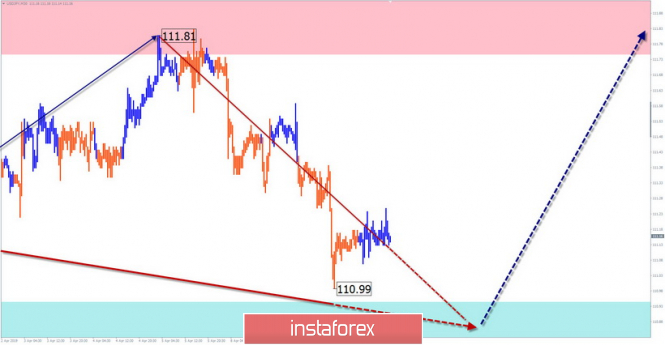 The main direction of the short-term movement of the bullish wave of the Aussie goes against the main trend and has little potential. The current short-term wave construction is ascending on March 8th. Its structure completed the first 2 parts (A+B). The final part (C) started on April 2.

At the beginning of the bullish price movement, the nearest target zone is in the area of the lowest possible extension of the wave upwards. In the case of a breakthrough of the upper boundary of the zone, the price may rise to the region where the 74th price figure has begun.

In the coming days, the emphasis in the trade should be made on the purchases of the pair. When generating opposite signals in the area of resistance, the direction vector of transactions should be changed to descending. 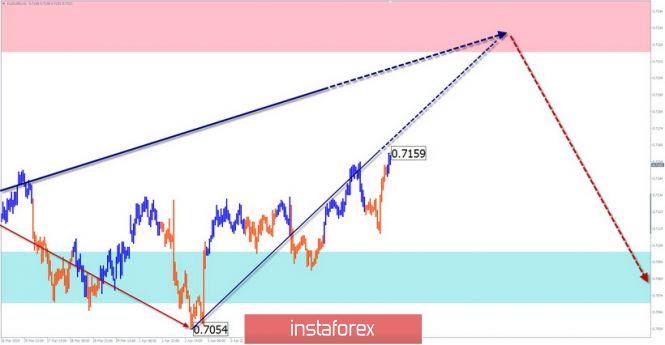 Explanations for the figures: Waves in the simplified wave analysis consist of 3 parts (A – B – C). The last unfinished wave is analyzed. Zones show areas with the highest probability of reversal. The arrows indicate the wave marking according to the method used by the author, the solid background - the formed structure, the dotted ones - the expected movements.

Note: The wave algorithm does not take into account the duration of the instrument movements in time.

The material has been provided by InstaForex Company - www.instaforex.com
Simplified wave analysis of the main currency pairs on April 10