Simplified wave analysis of the main currency pairs on April 11

The general vector of the euro price movement in recent weeks is set by the upward wave of March 3. In the larger wave of H4, it completes the upward correction model. Since March 20, a wave zigzag of the middle part (B) is formed in the wave structure. There is a high probability of breaking down the level of the beginning of the current wave.

In the next trading session, the price of the pair will reach the boundaries of the calculated resistance. Short-term break of the upper limit is not excluded. Further, a change of course and the beginning of a decline is expected. The nearest support will limit the volatility of the pair for the next day.

Short-term purchases are possible only on the smallest TF. Upon reaching the resistance zone, it is recommended to pay special attention to the sell signals. 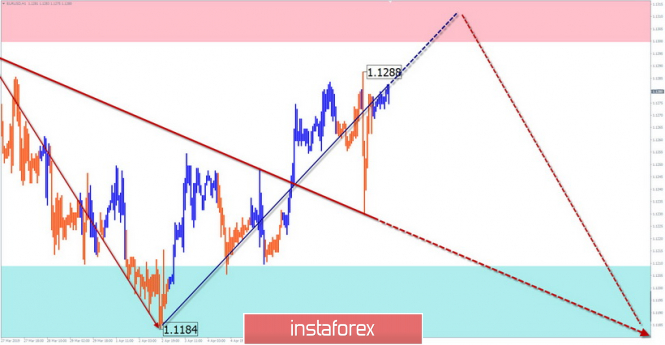 A bullish wave of the scale H4 indicates the main vector of movement in the short term. But the estimated range up is exhausted. The price is near the potential reversal zone. Unfinished wave H1 is starting from March 13. In the last 2 weeks, the structure formed the middle part.

The greatest probability of completion of the current rate in the last days rises in the nearest resistance zone. In case of a breakthrough, a short-term extension up to the middle of the 133rd figure is possible. Either option will be followed by a change of course and a decline to one of the calculated support zones.

Purchases are quite risky because of the small potential. It is recommended to track the reversal signals to find the point of sale of the pair. 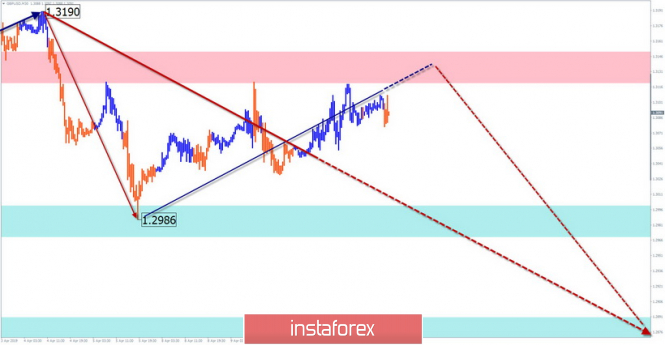 The last unfinished wave of the short-term trend of the Japanese yen is starting from March 25. It gave rise to the final part (C) in a larger wave model. The nature of the movement is close to impulse. In the structure, the middle correctional part (B) is nearing its end. The price has reached the estimated completion zone, but there are no turn signals yet.

In the next day, we should wait for the completion of the bearish stage of the price movement and the beginning of an active price increase. The upper limit of the expected daily volatility is within the resistance zone.

Sales have little potential and are very risky. After a second rollback to the support area, it is recommended to monitor the signals of your trading systems to make purchases of the pair. 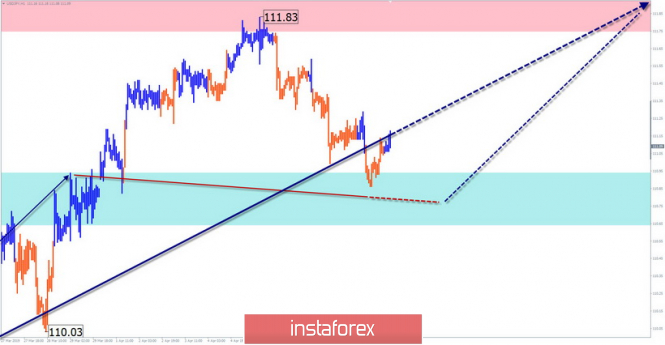 Note: The wave algorithm does not take into account the duration of the instrument movements in time.

The material has been provided by InstaForex Company - www.instaforex.com
Simplified wave analysis of the main currency pairs on April 11