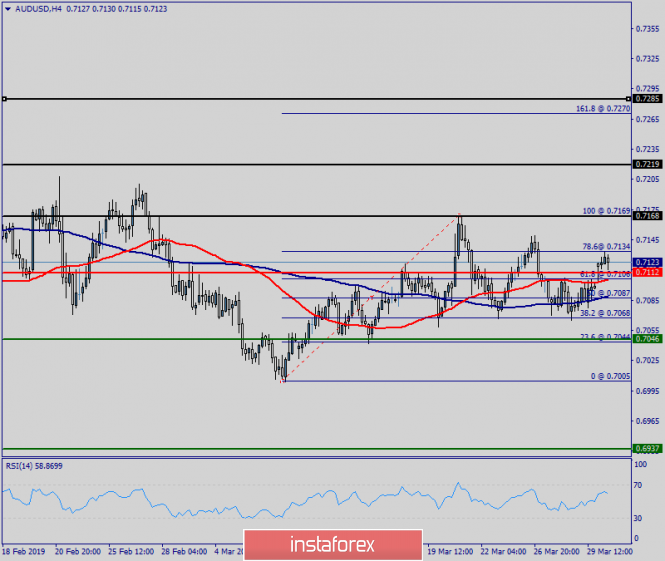 The AUD/USD pair is set above strong support at the levels of 0.7046 and 0.7168. This support has been rejected four times confirming the uptrend. Hence, the major support is seen at the level of 0.7046, because the trend is still showing strength above it. Accordingly, the pair is still in the uptrend in the area of 0.7046 and 0.7168. The AUD/USD pair is trading in the bullish trend from the last support line of 0.7112 towards thae first resistance level of 0.7168 in order to test it. This is confirmed by the RSI indicator signaling that we are still in the bullish trending market. Now, the pair is likely to begin an ascending movement to the point of 0.7168 and further to the level of 0.7290. The level of 0.7389 will act as the major resistance and the double top is already set at the point of 0.7389. At the same time, if there is a breakout at the support levels of 0.7112 and 0.7046, this scenario may be invalidated. Overall, however, we still prefer the bullish scenario.

The material has been provided by InstaForex Company - www.instaforex.com
2019 Technical analysis of AUD/USD for April 01

EUR/USD. March 4th. Results of the day. The end of the trade war has a positive effect on the US dollar

4-hour timeframe The amplitude of the last 5 days (high-low): 41p - 58p - 42p - 61p - 56p. Average amplitude for the last 5 days: 52p (48p). On Monday, March 4th, the EUR/USD currency pair shows a rather strong downward movement. It seems that traders were filled with rather modest purchases of the European currency and once again came to the conclusion that there were no compelling reasons for mid-term and long-term purchases of the euro. Today there was not a single important macroeconomic report published in the eurozone or the United States. There were no speeches by Trump or other top US or EU leaders. However, today there is information that the United States and China are close to signing a trade agreement that will end the trade war. It is noted that China will reduce tariffs on agricultural products, chemical and automotive, and the United States will lift most of the sanctions on Chinese goods, which were introduced last year. Also among the agreements is a deal on China&