The dollar rejoices. How long? 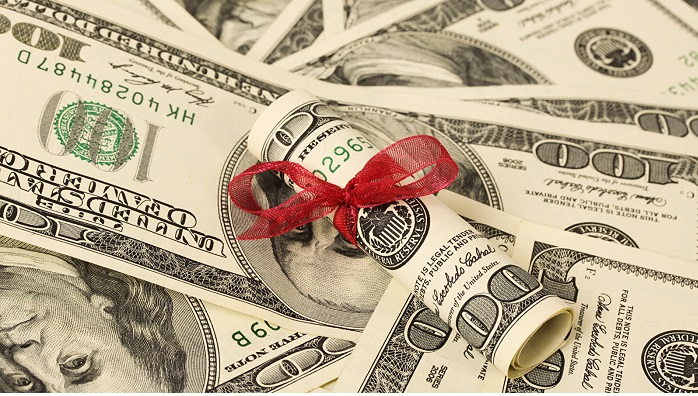 The dollar started a new week on the positive. The mood of the US currency has improved the consensus forecast of Bloomberg experts, according to which the US economy in the first quarter will expand by 2.2%, and not by 1.5%, as was said in March. At the same time, the respondents from Wall Street Journal see a figure of 2.4%, and a leading indicator from the Atlanta Federal Reserve Bank indicates a 2.8% increase in GDP.

On Monday, the dollar index is trading around 97, staying near local highs over the past six months. Correctional kickbacks have recently become less and less deep. This may indicate a decrease in pressure from the "bears" on the US currency. A breakthrough of the resistance area can shift the scope of the bulls to an important round level of 100. Then it is possible to test the 103 mark, where the dollar rose in early 2017.

Of course, a strong economy is good for the dollar, but not in this case. The Federal Reserve is now in rest and waiting mode, so the benefit goes towards the global GDP.

Chicago Fed President Charles Evans said that in case of a decrease in inflation and a long stay near 1.5%, the central bank will need to play it safe and loosen its monetary policy. The index of personal consumption expenditures will slow in March to 1.6%, a JP Morgan study showed. Fed Vice President Richard Clarida said that the recession was not the only reason for which the regulator had previously resorted to monetary expansion. Thus, during the 12 months from February 1994, the rate increased from 3.25% to 6%, and then was reduced at three FOMC meetings. The reason - the rate of inflation was much lower than the forecast of the central bank.

It's funny, but if you use the Eurostat methodology to calculate the US CPI, the situation will turn into a catastrophe at one point. It turns out that prices in America are slowing even faster than in the eurozone.

As for the EUR/USD pair, its fall, most likely, is due not to a strong dollar, but to a weak euro. However, the fact that the economies of the United States and the People's Republic of China give out indicators above the forecast, as a result will have a positive impact on the GDP of the euro bloc.

In addition to slowing growth in the euro area, a major reason for the depreciation of EUR/USD is the difference in the level of interest rates in the Fed and the ECB. This factor also makes selling the EUR/USD pair profitable in case of low volatility, as it is now. Thus, the demand for borrowed funds in euros to buy the US currency will ensure a subsequent decrease in quotations in the near future.

The single currency is likely to go to $1.12, and possibly lower. However, the potential of a downward campaign is limited, and a return to the resistance of $1.1325 will be a strong argument in favor of fans of the euro.

Last week, the UK published "motley" statistics. The reduction in inflation does not add optimism, but the steady growth of wages against the positive background of retail sales supports the idea of raising the rate of the central bank of England. This should be taken seriously only if Britain is "profitable" in divorcing the EU. It's complicated. No exit without a deal is now unacceptable, and no one knows which of the options the central bank considers to be "the best".

Parliament is returning from a long Easter weekend, but no new votes on the topic of Brexit are planned for the time being. Traders expect at least a hint of compromise from British politicians.

Rumour has it that the regional leaders - the Labour party will come up with a proposal for Corbyn to refuse from a repeated referendum for finalizing an already ratified agreement. Such a step will help reach a compromise with the government, including in terms of maintaining UK membership in the Customs Union with the EU. If Theresa May and Jeremy Corbyn manage to agree, then at least local political support from the European Union will be guaranteed. This alignment contributes to a stable growth of the pound, and then the euro.

The material has been provided by InstaForex Company - www.instaforex.com
The dollar rejoices. How long?