The general fundamental background of Monday is very different from the fundamental picture of Friday. The panic subsided, risk appetite increased, the configuration of many currency pairs has changed. Events of a global nature still have priority over macroeconomic reports – and this fact today actually "saved" the single currency from the next downward turn. Despite the extremely weak data on the growth of European inflation, the EUR/USD pair showed modest corrective growth, following external fundamental factors.

Inflation in the eurozone has indeed disappointed. After a slight increase in February, the consumer price index returned to the January level, that is, at 1.4%. Core inflation fell even more than forecasts: most experts expected a decline to 0.9% (from the level of 1%), while the release came out at 0.8%. This is the weakest indicator growth rate since April 2018. On the one hand, this result did not come as a surprise after the extremely disappointing data from Germany. Let me remind you that in January, the German consumer price index in annual terms showed a positive trend (+ 1.5%), after a strong decline in January. However, in March, the indicators slowed down again, being at the level of 1.3%. European inflation actually repeats this trajectory. 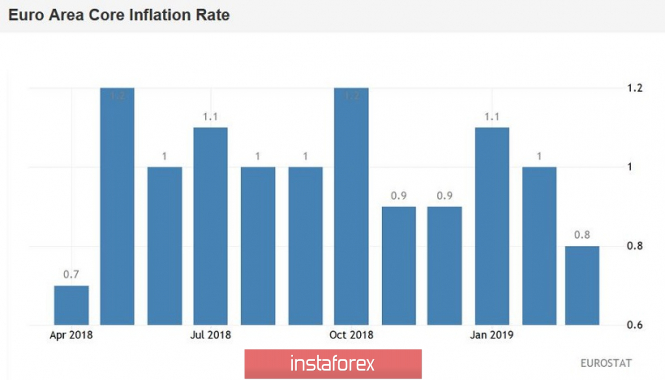 On the other hand, today's release served as another reminder that the European Central Bank will not soon recall tightening monetary policy, at least not this year. But if such rates of reduction in core inflation continue to persist, then the option of mitigating the parameters of monetary policy is not excluded.

However, the market actually ignored the most important release, focusing today on larger-scale events. First, there are prospects for ending the trade war between the United States and China. For several weeks, the parties remained silent, which provoked rather alarming rumors about the failure of the negotiation process. But at the weekend, it became known that Beijing did not renew the effect of retaliatory duties on American goods (namely, cars and automotive components from the United States at a rate of 25%), thereby extending the "pause" in effect from January 1. This suggests that China still intends to find a compromise with Washington because such a significant step was made on the eve of the next round of talks to be held this week in the US capital.

The experts also noted the fact that representatives of the Middle Kingdom responded quickly responded to the concerns of the American side about the prospects for the negotiation process. There is another example of a "curves" on the part of Beijing. Thus, the US authorities have repeatedly demanded that the government of the People's Republic of China limit the turnover of fentanyl - the strongest opioid analgesic, which is usually used in medicine as an anesthetic. Americans have long complained about the fact that China is the largest supplier of fentanyl to the US market, while this drug causes addiction, which often leads to an overdose, and often – to death. This issue, which has little to do with the trade war, was discussed for a long time and was resolved unexpectedly this week: just before the next round of China-US negotiations. The Chinese have significantly tightened control over the turnover of fentanyl and its derivatives – in fact, meeting the demands of the Americans.

In other words, traders once again had the hope of concluding a broad trade deal that would put an end to a trade war and — perhaps — slow the decline of the global economy. This fact weakened anti-risk sentiment and halted the growth of the dollar, which gained momentum last week.

In addition, the single currency is closely monitoring the pound, or rather – for Brexit. Tonight in the British Parliament will be held "signal voting", the results of which will allow understanding – whether soft Brexit is real in principle or not. A considerable number of rumors proliferate around this topic, most of which, surprisingly, is positive. Thus, according to one of the versions, during today's vote, Labor can support the so-called "Single Market Amendment 2.0". This amendment implies a "soft" version of Brexit and implies free movement in the region. If the interests of the Labor Party and the Conservatives converge on this option, then the chances for approval of the transaction will increase significantly in the near future. And although the market is already tired of being disappointed by the British Parliament, optimism over the pound today prevails. Partly due to this factor, the euro is also kept afloat, especially on the background of indecision of dollar bulls.

Thus, all the factors listed above allow the EUR/USD pair to keep within the 12th figure, thereby maintaining the potential for corrective growth towards the middle line of the Bollinger Bands indicator on the daily chart, which corresponds to 1.1290. The task of the EUR/USD bears has not changed since last week: they need to break through the lower line of the Bollinger Bands (1.1180), thereby entrenched in the 11th figure. Only in this case, it will be possible to talk about a more large-scale movement down to the main support level of 1.10.

The material has been provided by InstaForex Company - www.instaforex.com
The task of the bulls EUR/USD is to keep 1.1180