The upward momentum in the pair EURUSD gradually subsides

Data on industrial production in the eurozone, which were slightly better than economists' forecasts, provided only temporary support for the euro as the overall situation in the eurozone leaves much to be desired. Recently, there has been more talk of assessing the side effects of negative interest rates on the eurozone banking system and less about raising interest rates at the end of this year. During its recent meeting, the European regulator only vaguely hinted at such an increase, and then subject to a number of conditions that are directly related to economic data.

As for Friday data on industrial production, according to the report, it fell in February by 0.2% compared with January and by 0.3% compared with February 2018. Despite weak indicators, the report led to an increase in the euro, as economists expected that industrial production in the eurozone would fall immediately by 0.6% and 1.2%, respectively. Production data for January were revised to 1.9% and -0.7%. All this once again confirms the concerns of the European Central Bank related to the weak economic growth of the region.

Data from the US Department of Commerce released in the second half of the day allowed the US dollar to strengthen its position. According to the report, the cost of foreign goods imported into the United States increased in March of this year, indicating that inflation is rising.

Thus, import prices in March 2019 increased by 0.6% compared with the previous month, while economists had expected a growth of 0.5%. The rise in prices in February compared with January was revised upwards to 1%. 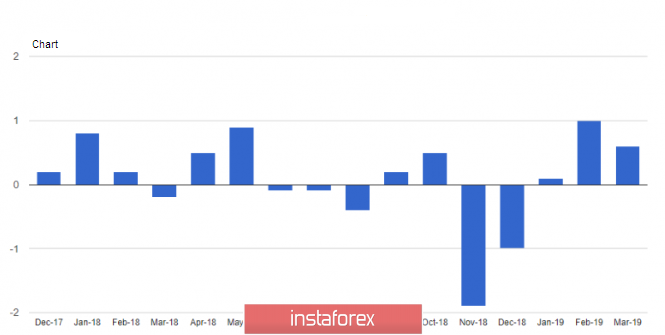 Already by the middle of the North American session, the upward potential for the US dollar was limited by the consumer assessment with regard to the US economy, which in April deteriorated amid the extinction of the stimulating effect of tax reform. Let me remind you that the data are advanced and preliminary.

As for the technical picture of the EURUSD pair, the chart shows the formation of the upper limit of the new downward channel, so it is very problematic to talk about the further growth of the euro. Only a confident consolidation above the resistance of 1.1320 will return an upward momentum to risky assets, which will lead to a test of new weekly highs around 1.1360 and 1.1390. The downward movement in euros, which can be formed at the beginning of this week, will be restrained by the levels of 1.1280 and 1.1255.

The material has been provided by InstaForex Company - www.instaforex.com
The upward momentum in the pair EURUSD gradually subsides