The yen has fallen out of favor

After an impressive 2018, when the trade wars, the slowdown of the economy of the Middle Kingdom, the collapse of world stock indices, political crises in Britain and Italy made the Japanese Yen the best performer of G-10, in 2019 the currency of the rising sun fell out of favor. After the January flash crash, many Bloomberg experts talked about the readiness of the "bears" on USD/JPY to lead the pair to the psychologically important mark of 100. Alas, since then their worldview has changed significantly.

The main drivers for the yen decline are the improvement of the global risk appetite and the associated increase in interest in carry trade operations. Unlike last year's debacle, the monetary units of developing countries feel confident in the conditions of low borrowing costs, falling volatility and a better start for US stock indices since 1998. Funding currencies, on the contrary, came under pressure. The main reasons should be sought in the Fed's intention to make a long pause in the process of monetary restriction, as well as in the de-escalation of the US-Chinese trade conflict. If in 2018 the trade wars led to the fall of the Shanghai Composite and the slowdown of China's GDP to minimum levels for several decades, then in 2019 the situation has changed.

The yen does not help the Japanese investors reduce their demand for foreign assets (in the first quarter they acquired foreign securities for £ 7.85 trillion, for the same period last year - by £ 20.1 trillion), nor the drop in the yield of US Treasury bonds to the region of 16 -month lows.

Dynamics of USD/JPY and the yield of US bonds 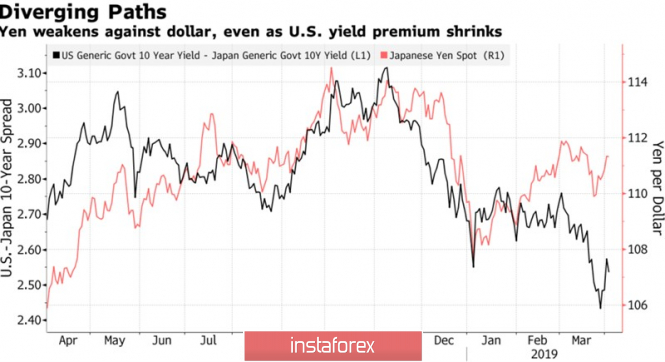 It is doubtful that the Fed decided to resume the cycle of normalization of monetary policy in an environment where the US President requires Jerome Powell and his team to reduce rates and resuscitate QE. If so, then competing central banks are unlikely to change their minds and continue to adhere to the "pigeon" rhetoric. The yield of bonds will remain low, the markets will not experience a lack of liquidity, which will increase interest in risky assets. Funding currencies, by contrast, will remain under pressure. This circumstance allows us to count on the continuation of the rally USD/JPY.

The situation for bears in EUR/JPY is no better. The unemployment rate in Japan is at around 2.3%, the lowest in two decades, but, unlike in the eurozone, wages are characterized by sluggish growth. The level of debt in the Land of the Rising Sun (230% of GDP) is also incomparable with the currency block (89%). After several years of fiscal consolidation, the latter can count on a large-scale fiscal stimulus that will support the euro.

Important statistics on US inflation, European industrial production, the publication of the minutes of the FOMC meeting and the meeting of the Governing Council of the ECB force us to pay increased attention to the USD/JPY and EUR/JPY pairs.

Technically, in the case of updating the March maximum and activating the AB = CD pattern, the dollar risks continuing to rally against the yen in the direction of 113.5-113.6 (161.8% target).

The material has been provided by InstaForex Company - www.instaforex.com
The yen has fallen out of favor