Macroeconomic data released yesterday, especially in the United States, somewhat alerted market participants. The fact is that the ADP data on employment, which precedes the release of the Department of Labor's report, showed an increase in employment by 129 thousand. They expected growth of 170 thousand, and employment increased by 197 thousand in the previous period. In other words, the growth rate of employment is quite significantly slowing. The final data on business activity indexes showed a decrease in the service sector index from 56.0 to 55.3, and the composite index from 55.5 to 54.6. But European statistics clearly inspires optimism as the growth rate of retail sales accelerated from 2.2% to 2.8%. Such a significant increase in retail sales allows us to ignore the composite index of business activity's decline from 51.9 to 51.6. Moreover, the business activity index in the service sector increased from 52.8 to 53.3. So it is not surprising that the single European currency was able to somewhat improve its position against the dollar. At the same time, weak US statistics made it possible for the pound to calmly move the news about the decline in the business activity index in the UK services sector from 51.3 to 48.9.

You also can not ignore the farce around Brexit, which also affects investor sentiment. Yesterday's events are clearly confusing, which made it difficult for market participants to decide on what and how to do next. So, at first everyone wildly rejoiced and clapped their hands on the fact that Theresa May and Jeremy Corbyn had a meeting where they agreed on a plan for further negotiations on finding a compromise option regarding Brexit. Although this news itself sounds extremely comical, some people thought this was not enough, and the House of Commons also joined the general circus and managed to pass a law obliging the government to exclude the possibility of a rigid Brexit, that is, without an agreement. However, the entire British political elite tritely ignored Jean-Claude Juncker's words that there would be no delays, and either the United Kingdom signed the agreement, or on April 12, it would be evicted from the European dormitory without any kind of "foreplay" as a transitional period. So it seems like the British politicians are certain that only they can decide how things will be, and the rest will only be notified of their decision. To their grief, the British empire is long gone, and awareness of this fact can be extremely painful, especially for the economy of the United Kingdom. It is worth paying attention to Jean-Claude's words that the European Union is ready for a hard Brexit, hinting that from about 2017, Brussels managed to adopt several dozens of laws and regulations that mitigate the consequences of such a scenario for Europe. Everyone is arguing about how much they need a delay in London. Although it is obvious that Europe has long prepared a hard kick in the ass for the UK.

Today, it is better to wait for comments from British politicians regarding Jean-Claude Juncker's words from yesterday. Although all the king's army is so keen on picking up Humpty Dumpty that the piano in the bushes may not be noticed. But with the macroeconomic statistics today, everything is sad, since only data on applications for unemployment benefits in the United States are released, which is seen to show a decline by 1 thousand. This should occur due to a decrease in the number of repeated applications by 6 thousand, while the number of primary ones could increase by 5 thousand. But today these data are of little interest to anyone, since the US Department of Labor's report will be published tomorrow, and investors will be preparing for it. Moreover, the forecasts are still moderately optimistic.

The euro/dollar currency pair, having felt support around the level of 1.1180, went into a correction phase, in the direction of the recent accumulation of 1.1250. It is likely to assume a temporary bump in the current values, where there is a prospect of a reversal towards 1.1215 - 1.1200 - 1.1180. 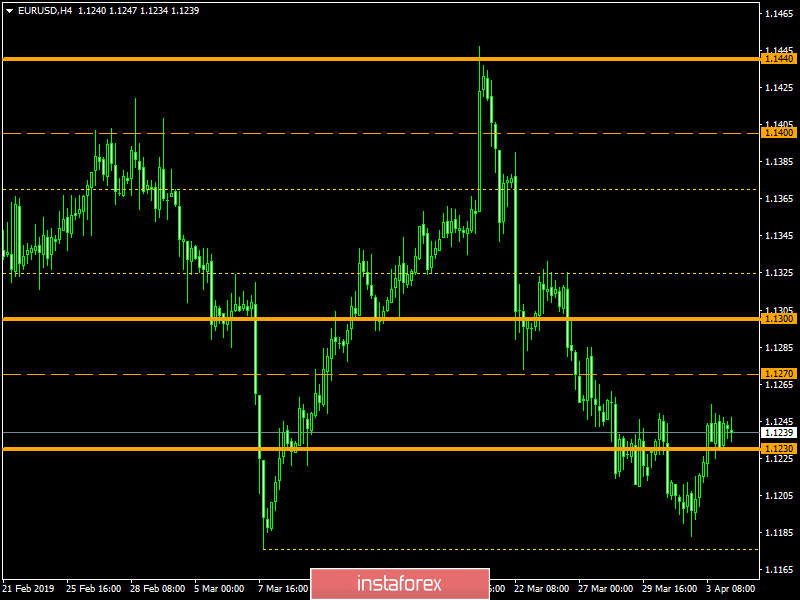 During the week, the pound/dollar pair traced a corrective movement from the psychological level of 1.3000, reaching as a result, the boundaries of the recent accumulation of 1.3200 (20). It is likely to assume a temporary bump of 1.3150/1.3190 with the prospect of a further decline. 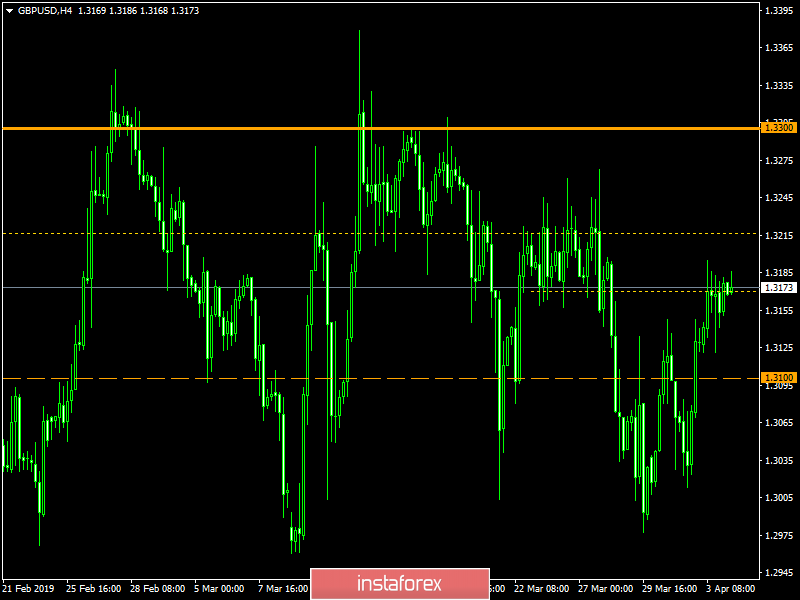 The material has been provided by InstaForex Company - www.instaforex.com
Trading plan for 04/04/2019