The IMF has updated its assessment for the growth rate of the global economy. This assessment looks negative compared to the forecasts of 2018. The IMF predicts a slowdown for about 70% of the world economy in terms of value, indicating that negative trends manifested themselves in the second half of last year and will soon develop in 2019.

Among large economies, the forecast is improved only for Japan and China. Therefore, if Japan has the lowest GDP growth rates, then China's improvement is a completely unexpected result for most analysts.

The deterioration of forecasts was expected, but it does not cause a noticeable reaction in the markets. Oil is steadily growing for the fourth month in a row. Stock indexes continue to break records. Investors prefer not to notice the obvious signals sent by central banks. Meanwhile, a pullback from the policy of tightening the Fed is a clear sign that the recession is approaching, and not a single major Central Bank is left to adhere to hawkish policies.

It is possible that the problem is against the background of weak GDP growth in the past six months. The labor market remains strong and stable in most countries, and this inspires certain illusions. They say, the recession will be temporary, and then world trade and the economy will recover. The problem is that the labor market is a lagging indicator and reflects only production growth in the first half of 2018.

In the coming months, most likely, signs of deterioration in the labor market will begin to appear, which will intensify panic. This will lead to a drop in production and a rapid deterioration in GDP growth.

The forecast of GDP growth for Japan is quite logical. As shown by historical studies, Japan is usually easier to go through crises than most countries. This is due to Japan's pronounced commodity dependence. Raw materials prices are falling during the crisis, which is quite an important growth stimulus for Japanese manufacturers.

In the meantime, the opposite is true for Japan- preliminary data on orders for machinery and equipment in March are declining at an annual rate of 28.5%. The trend reversal occurred in November 2017, which is explained not only by high costs due to raw material prices, but also a slowdown in world trade. 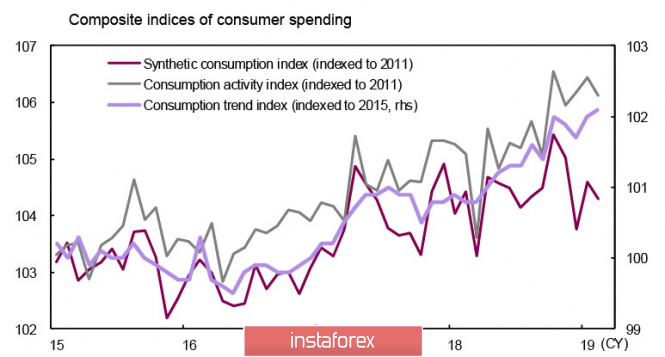 The MIC and BOJ indices tend to increase. However, the Cabinet index, which is used by many private sector economists in forecasting the GDP component of private consumption, remains constant. The average value for January-February 2019 was below the 4th quarter of 2018, confirming that the state of consumer spending is not particularly favorable. This indicates the possibility of a decline in real GDP by the 1st quarter of 2019.

After Fed's refusal to raise the rates, the rise in oil and the short-term euphoria led to a decrease in the yen. Panic sentiment is reduced, so the pressure on defensive assets is reasonable. At the same time, the growth of US indices is almost entirely based on the buyback mechanism, as supported by a number of reasons such that of tax reform. As a result, it led to the repatriation of US capital and the suspension of tightening financial conditions. This mechanism has its limits to growth, but as long as it works, the yen will continue to remain under pressure.

The upward momentum on USDJPY is still strong. The nearest resistance is 112.13, further to levels 112.48 and 113.37. The weakening of the yen is objectively in the short and medium term.

The material has been provided by InstaForex Company - www.instaforex.com
USDJPY: Short-term outlook for the yen remains negative