Wave analysis of EUR / USD for April 15. News background is zero and it can help the euro currency 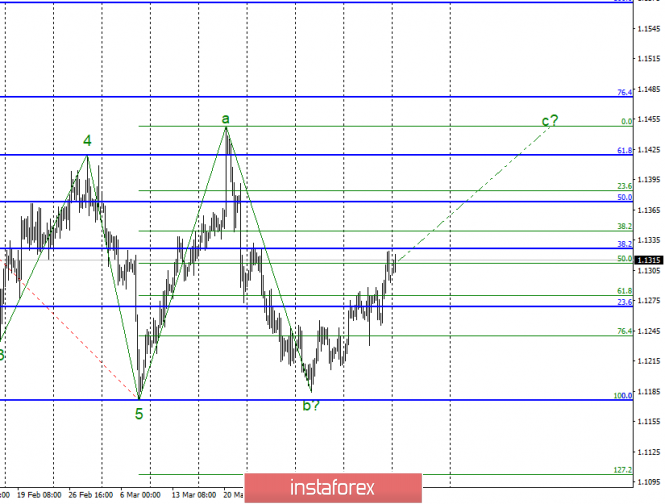 On Friday, April 12, bidding ended for the pair EUR / USD by 70 bp increase. Market activity has increased slightly, and the current wave counting remains unchanged. It involves the construction of an upward wave c, since at least wave 5 has not been updated. Thus, I still expect the tool to increase. The news background remains neutral, therefore, neither the euro nor the dollar now has additional support. Today, I do not expect news from America or the European Union. Thus, there are no visible reasons preventing the continuation of the construction of the ascending wave. I recommend to return to the pair sales after a successful break through attempt to the minimum of wave 5 or after receiving a signal of the end of the current wave c.

The pair presumably continues to build a wave. Thus, the trading strategy remains the same. I recommend buying a pair with targets located near the estimated levels of 1.1448 and 1.1476, which corresponds to 100.0% and 76.4% Fibonacci. The tool does not give reasons for sales.

The material has been provided by InstaForex Company - www.instaforex.com
Wave analysis of EUR / USD for April 15. News background is zero and it can help the euro currency