Wave analysis of EUR / USD for April 16. Wave counting is stable, trade war does not affect the tool. 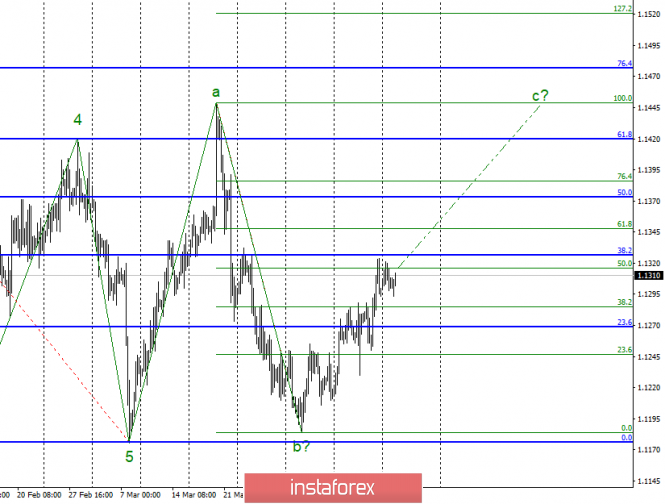 On Monday, April 15, trading ended for EUR / USD with a decrease of several base points, and the market activity was zero. However, the absence of an impressive decline still retains excellent chances for a continued enhancement of the instrument within wave c. The unsuccessful attempt to break through the 50.0% Fibonacci mark, thus, stopped the pair only for a while. There are no prerequisites for completing the promotion now. The news background for the couple is not even neutral now, it is completely absent. Recently, fears have arisen for a trade war that may arise between America and the European Union, but the parties have not yet taken any concrete steps in this direction, exchanging only mutual threats to impose fees of approximately the same amount.

The pair presumably continues to build a wave. Thus, the trading strategy remains the same - I recommend buying a pair with targets located near the estimated levels of 1.1448 and 1.1476, which corresponds to 100.0% and 76.4% Fibonacci. There are no reasons for sales. A downward rollback is possible, as the pair made two unsuccessful attempts to break through the 50.0% Fibonacci level.

The material has been provided by InstaForex Company - www.instaforex.com
trade war does not affect the tool. Wave analysis of EUR / USD for April 16. Wave counting is stable