Wave analysis of EUR / USD for April 24. The news background does not support the euro 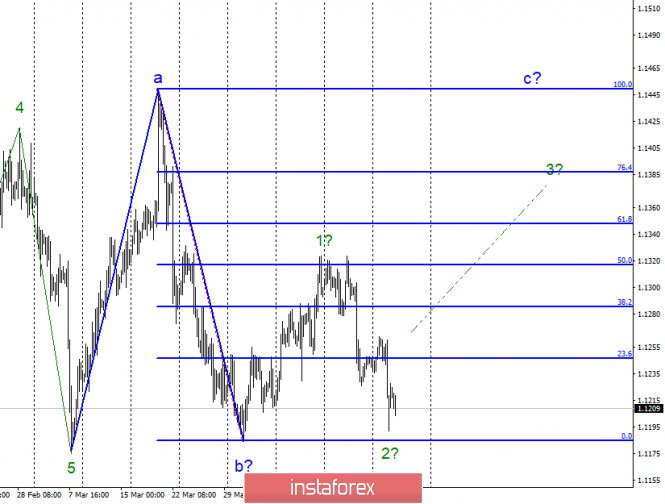 On Tuesday, April 23, trading ended for EUR / USD by 30 bp lower. Wave 2 (assumed) takes a more complex form, but the current wave marking is still preserved, since there was no exit beyond the minimum of wave b. However, on the one hand, such a depth of wave 2 suggests that the pair is not ready to further increase. On the other hand, if you look at all the previous waves, it becomes clear that the correctional waves are approximately the same size as the impulse waves. Thus, such a depth of wave 2 may still end up with the transition to the construction of an ascending wave 3. Unfortunately, the news background does not provide any support for the euro currency. This is the main factor against the growth of the euro currency.

The pair presumably remains within the framework of the construction of wave c, and its internal wave 2 takes an extended form. Thus, now you can still buy a pair based on the construction of wave 3 with targets located near the estimated levels of 1.1349 and 1.1387, but going out of quotations beyond the minimum of wave b will mean the need to make adjustments to the current wave marking.

The material has been provided by InstaForex Company - www.instaforex.com
Wave analysis of EUR / USD for April 24. The news background does not support the euro