Wave analysis of GBP/USD for April 18. Waiting for a breakthrough of 1.2960, this will relieve tension from the market 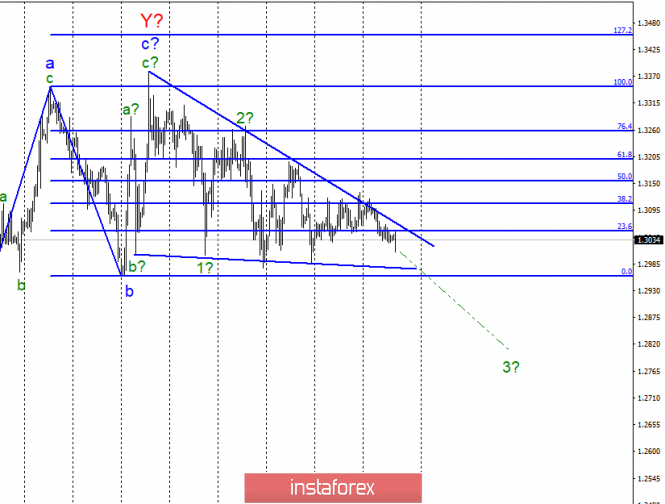 On April 17, the GBP/USD pair lost only about 5 bp. Thus, the market activity on the instrument remains low, and trading continues to take place inside the narrowing triangle. The current wave counting does not allow making any new conclusions, except those that have already been made. It is still assumed to construct a descending set of waves, in particular wave 3. The confirmation of this variant will be a successful attempt to break through the lower line of the triangle and the level of 0.0% Fibonacci. A weak report on inflation was released yesterday in the UK, and today a strong retail sales report, but the pound was declining in both cases. In general, the news background is not supporting the UK currency, with rare exceptions. Accordingly, the breakthrough of the level of 0.0% remains a forecast for the pair GBP/USD.

The wave pattern still involves the construction of a downward trend section. And the markets still can not withdraw a pair from the triangle, so the trades are held with a small amplitude. Accordingly, I recommend expecting a pair out of the triangle to determine the market mood for the near future. Now, I expect the fall of the pound sterling to the mark of 1.2961 and a breakthrough of this mark.

The material has been provided by InstaForex Company - www.instaforex.com
this will relieve tension from the market Wave analysis of GBP/USD for April 18. Waiting for a breakthrough of 1.2960