Will the Reserve Bank scare the "Australian"?

Looking at the unexpected growth of the March business activity in the manufacturing sector of China above the critical level of 50, the Australian dollar came to its senses. The slowdown of the economy of the Middle Kingdom and the GDP of the Green continent in the second half of 2018 were the main drivers for the weakening of the Aussie. If Beijing puts the country on the path of V-shaped recovery with the help of incentives, the bulls at AUD / USD have good chances to develop an attack. At the same time, the meeting of the Reserve Bank, statistics on retail sales, business activity, the real estate market, as well as news about relations between the USA and China, allow the Australian dollar to claim the most interesting currency for the first week of April.

While US stock indexes are marked by the best quarter since September 2009 and the best start since 1998, the volatility of financial markets remains low. And since the market conditions for raw materials are favorable for the currencies of the countries of exporters, it is rather unexpected to see Aussie among the outsiders. The divergence in the dynamics of AUD / USD and iron ore prices, one of the key components of the sovereign exports of the Green continent, suggests that the "Australian" is an undervalued currency. In such circumstances, encouraged by the devaluation and the "bullish" commodity market, exports should go up. Alas, the weakness of external demand does not allow him to spread his wings.

Canberra problems are not limited to a shrinking market. The Middle Kingdom makes a high demand for Australian real estate, and the slowdown of its economy contributes to falling prices. The population is starting to spend less and save more in order to purchase cheaper apartments, which translates into a slowdown in GDP and inflation. As a result, rumors of a decline in the basic interest rate of RBA are growing by leaps and bounds. It would be beneficial for the Central Bank to support them, since otherwise, an external background favorable for carry-traders could increase the demand for the Australian dollar.

In this regard, investor attentiveness to the April meeting of the Reserve Bank is quite appropriate. Firstly, in March, Philip Lowe, saying that the cash rate could be either increased or lowered, dropped Aussie. Secondly, at the end of the first month of spring, colleagues from RBNZ even knocked out their currency with the help of a phrase about easing monetary policy under the influence of increased international risks. Concerns about the repetition of the New Zealand scenario are holding back the attacks of the bulls at AUD / USD.

In my opinion, if Beijing and Washington, nevertheless, would able to sign an agreement on ending the trade war, and the economy of the Middle Kingdom begins to recover; the chances of a gradual strengthening of the Australian dollar will grow. Much will depend on the position of his American namesake. When both the White House and the Fed are interested in devaluation, it is difficult for the market to buy the USD index.

Technically, the "bulls" breakthrough on AUD / USD of the upper border of the downward long-term trading channel will increase the risks of implementing the first target of the "Wolfe Waves" pattern. It corresponds to the mark of 0.725. 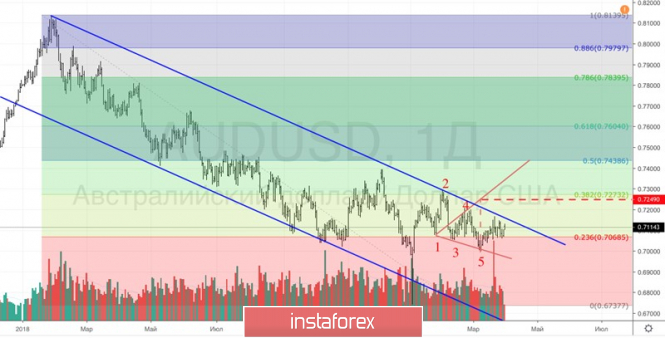 The material has been provided by InstaForex Company - www.instaforex.com
Will the Reserve Bank scare the "Australian"?